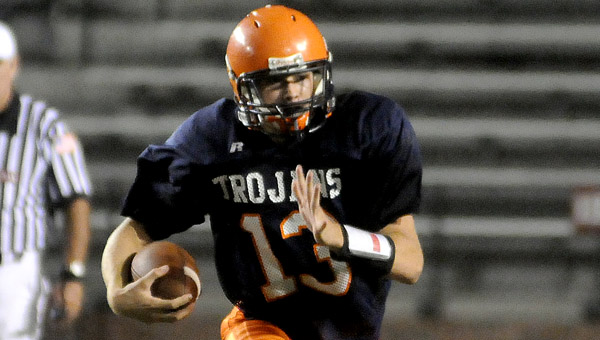 Even though the signing period for current high school senior football players is far from over, a Charles Henderson Trojan put his worries to rest this past weekend after a visit to Atlanta.

This past weekend Charles Henderson quarterback Corey Dennis and his family visited the campus of Georgia Tech with the hopes of getting an offer to continue his football career with one of the top programs in the country.

By the time Dennis returned to Troy, those hopes were a reality.

While both UAB and Troy had offered the Trojan football scholarships, the high school star turned both down for a bigger setting – the bright lights of Atlanta and the Atlantic Coast Conference.

“This was something that I was looking forward to for a long time,” Dennis said Sunday night.

“Troy and UAB are both great schools, but the whole time, (Georgia Tech) coach Charles Kelly had been recruiting me and wanted me to take a visit and I knew once I saw the campus and the facilities, I knew this was the place I wanted to be.”

Kelly is the team’s cornerback coach, and received his post-graduated degree from Troy back in 2002.

The 6-foot-2, 205 pound Dennis, who was Charles Henderson’s first ever player to throw for 1,000 yards and run for 1,000, dominated the field on the offensive side of the ball, however, he will be making a change in positions at the collegiate level.

The Yellow Jackets offered Dennis a scholarship as an athlete, which will allow him to come in at any number of positions.

But the position head coach Paul Johnson and company have in mind for Dennis is one he has spent very little time in – the safety position.

While there may be some concern about whether he can do it or not, there is none from the senior himself.

“I haven’t played defense before,” Dennis said. “But I have been on special teams pretty much every year except for this past one.

There is another believer in Dennis, his high school head coach, Hugh Fountain.

“This is something that Corey had been wanting to do since he came to Charles Henderson in the ninth grade,” Fountain said about his former quarterback.

“Corey has the tremendous opportunity to not only play football at a high level at Georgia Tech but also has the opportunity to play in one of the most competitive leagues in the country in the ACC. I know he is excited about this. I am excited for him. I know he is going to do a great job up there, no matter what he is doing”

In his last season with Charles Henderson, Dennis led the Trojans in many categories and was good enough to help the football team reach the playoffs for the first time since 2008 this past season.

Now, to be in a position to sign with a major football conference is one that Dennis is very grateful for.

“I am thankful and blessed for this opportunity. It’s something that every kid dreams about to compete for a championship and I can do that at Georgia Tech. This is another step for me, not only to play for a great football program but to go to a school that has some of the best academics in the country.”

Dennis said he plans on getting a degree in either engineering or business.

“They have the top engineering and business departments in the country, so I can’t go wrong,” he said.

“The campus was also something that I really enjoyed. It’s a lot different than I expected, it’s a lot more of a college campus than people might expect. It’s great. It felt like home away from home.”

As the son of Troy athletic director, and former University of Georgia football player, Steve Dennis, Corey said it was huge relief to have his recruiting process come to an end.

“To not have to worry about this anymore is a very good feeling,” he said.

“Now, all I am going to do is get ready and get back into the grove of things. I report to campus in June and I am looking forward to it. I know I have a lot of people up there who love me and want me to be there. My entire family backed me up 100 percent on my decision and that really made me feel more comfortable about the whole thing.”

Dennis will sign on the dotted line to make it official on National Signing Day, which will take place on Wednesday, Feb. 2.