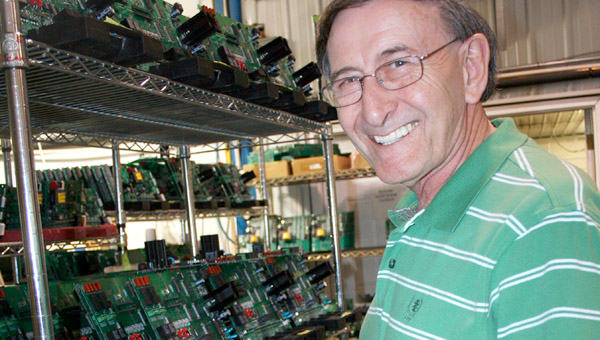 Dr. Johnny Wright's business, Brundidge Electronics Corporation, will be recognized as the BBA's Business of the Year on Thursday.

The Brundidge Electronics Corporation has been selected the association’s “Industry of the Year” and will be honored at the BBA’s annual banquet on Thursday night.

BEC is a homegrown industry that has survived the downturn in the economy and its back on its feet.

BEC started with no paid employees, a table and two chairs and shared space with the city’s nutrition center in the old National Guard Armory.

Today, BEC has sole ownership of the building, employs 68 local workers and builds sub assemblies that are sold throughout the United States.

Dr. Johnny Wright gives credit for the idea of starting an electronics company to his nephew, Nathan Sneed.

“It was basically a dream of Nathan’s to start a little electronics business,” Wright said. “He had worked for an electronics company in Elmore County. So, we got together to see what we would have to do to start a company of our own.”

In July 1990, Wright said the city of Brundidge allowed them to rent a small space in the old National Guard building and it was there that BEC was born.

“BEC is a contract electronics manufacturer that builds sub assemblies for hundreds of companies all across the country,” Wright said. “We are running two shifts a day and usually work seven days a week, off and on.”

Wright admits that the business has struggled, especially in the last couple of years.

“Like a lot of other businesses, we have struggled with the downfall of the economy but we were fortunate that we didn’t have to lay off any employees during that time,” Wright said. “And we were blessed with work the last quarter of 2010 and it has continued. We have added 20 to 25 people, both fulltime and part time. Right now business is good.”

Wright said some of the circuit boards are completely assembled at BEC such as those that go into music mixers and arrive ready to sell to customers.

“For others, the company does the final assembly,” he said. “We test some of the products here including those for Amazon and Dell. We are staying busy and we like it that way.”

Wright said he and his employees take pride in the work that they do and that their work often has nationwide implications.

“BEC built the printed circuit boards for the unit used by the Center for Disease Control to identify the first case of swine flu in the United States,” he said.

The electronics company that started from scratch in the hometown of a man and his nephew who dared to follow theirs dream has weather the recent economic down spiral and the future looks bring for Brundidge Electronics Corporation.

“We are very happy to be in Brundidge, Alabama,” Wright said. “Brundidge is our hometown and we wanted to business at home. The city has been good to us. Had it not been for the mayor and the city council, we couldn’t have gotten started. And, were it not for our good ‘homegrown’ employees, we would not have been as successful as we have been.

“We had no financial backing and actually started from scratch. Over the 20 years, we’ve been able to grow a little bit. What’s holding us back now is that there is not a pool of skilled employees to draw from and the need for additional space. But we’re working toward a training program and expanding our existing facility.

“We’re proud to be in Brundidge. That’s why it’s part of our name.”

Wright expressed appreciation to the BBA for recognizing BEC as its “Industry of the Year.”

“It’s always humbling and encouraging to be honored by your hometown,” he said. “We are most appreciative and proud to be a part of such a wonderful community.”