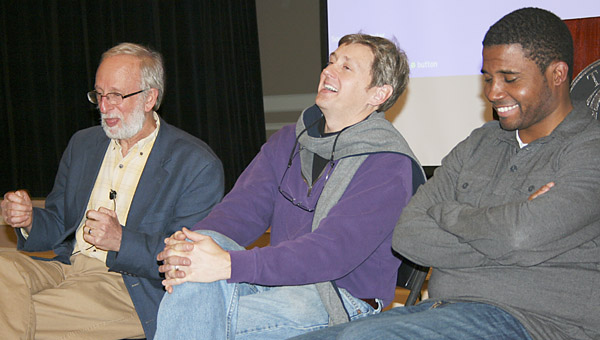 Mike Wiley and David zum Brunnen shared a laugh with author Richard Glaubman, during the “Life Is So Good” Lecture series Thursday at the Trojan Center Ballroom. The lectures were events of the Troy University College of Communication and Fine Arts. (Photo/ Jaine Treadwell)

The two men had nothing in common.

But George Dawson needed to tell his story and Richard Glaubman needed to listen.

As Dawson talked and Glaubman listened, both of their worlds were changed.

Dawson was an African-American living an obscure life in South Dallas. Glaubman was a teacher and writer living comfortably in Seattle.

Odds of the two ever meeting were astronomical and a meeting would never have happened except for a newspaper article that caught Glaubman’s eye and tugged at his heart.

The article told the story of Dawson, who at age 98 had learned to read.

For some reason, the story captured Glaubman’s interest and he was soon on a plane bound for Dallas to meet Dawson.

“I’m not sure what compelled me to get on a plane to talk to an old man that I didn’t know,” Glaubman told those who attended his lectures at Troy University Thursday. “But sometimes you just know when the time is right.”

The first meeting was a bit uncomfortable for Glaubman as he and Dawson were from two different worlds. And, he said, it was probably the same for Dawson.

“Before he learned to read, the only sense of the world George Dawson had was what others were telling him,” Glaubman said. “And what he was hearing was filtered through their opinions. He had always wanted to learn to read but never had the chance. He was delighted at having learned to read.”

Dawson’s favorite reading material was the newspaper and he was finding the world a new and exciting place as he was no longer having to depend on others to tell him what was happening in the world around him. He was beginning to think for himself.

Glaubman realized the importance of Dawson’s story and Dawson agreed to tell it to him.

Over time, the two men became friends and Glaubman was invited to live with Dawson while his story unfolded.

“We were in the grocery store and Dawson was reading the labels on one product after another,” Glaubman said. “I asked him why he was doing that and he said, ‘Because I can.’”

Dawson’s reading level was rather low so he especially enjoyed reading children’s books to his great-grandchildren.

“Once, when we were driving along the highway, I could hear him reading the billboards just as I had done when I was about 6 years old,” Glaubman said. “His excitement at being able to read was much the same as mine had been. The sequence was the same.”

Together, with Dawson talking and Glaubman listening, they co-authored a book about Dawson’s life and his eagerness to learn to read at age 98.

The book titled, “Life Is So Good” is George Dawson’s autobiography. It’s the story of his struggles and his greatest triumph, learning to read at a very advanced age.

It’s also a book of inspiration because it comes for the heart of a man who treated others like he wanted them to treat him. It’s the story of a man who lived for the day because he had no promise of tomorrow.

It’s the story of a man who graciously and humbly accepted his “celebrity.”

When people crowded around him, Glaubman said Dawson said, “I’ve been ignored for a hundred years, if they want to talk to me, that’s all right.”

Dawson traveled to Glaubman’s home state for a book signing and attended a party in his honor.

“I didn’t think I would live so long that there would be a party where it didn’t matter what color you are,” he said.

Dawson died in 2001 but he lived long enough to attend a party like that and to know that the challenge that he had met and won will inspire others to learn to read no matter what their age and that they, too, can walk into another world all because they learned to read.

Glaubman isn’t sure whether Dawson ever read, “Life Is So Good.”

“He said that he had so many other things to read and that he had already read it,” Glaubman said, laughing. “That was George Dawson.”