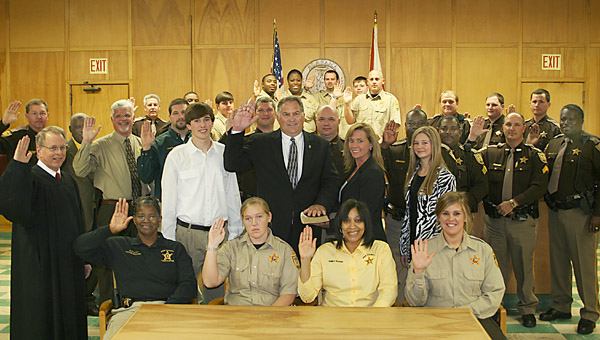 Pike County Sehriff Russell Thomas, center, is surrounded by his family and deputies after swearing-in ceremony Wednesday at the Pike County Courthouse. Thomas is serving his fifth term as sheriff, and he and the deputies were sworn in together at the ceremony.

Pike County Sheriff Russell Thomas was sworn in for his fifth term during a ceremony at the Pike County Courthouse Wednesday afternoon.

Thomas was elected Pike County’s chief law enforcement officer in 1994 by receiving the most votes ever in Pike County history.

“I believe that the votes I received in 2010, were a vote of confidence in what I do and in support of the job that we do as the sheriff’s department for the people of Pike County,” Thomas said. “I appreciate the confidence shown in me and the Pike County Sheriff’s Department. We all work to uphold the law and protect the people we serve.”

Thomas said the Pike County Sheriff’s Department is a family and they are all dedicated to the people of the county.

For that reason, Thomas asked that all of his deputies, correctional officers and office staff take the oath of office with him.

“When I’m elected sheriff, the people have to have confidence in our department and believe in our officers and staff,” he said. “We are all dedicated to providing the best possible law enforcement for all the people.”

Thomas said he enjoys what he does and looks forward to the challenges that come with the territory, day after day and week after week. He thanked his family for their continuing support.

“Without that base of support at home, I could not do the job as effectively as it requires or as I want,” he said. “Serving the people of Pike County is its own reward.”

Thomas said he is committed to being the “people’s sheriff” for years to come.

“From the first day on the job, my door has been open,” he said. “Nobody needs an appointment to see me. You can come and talk about anything you want, no matter how large or small the issue. The door of the Pike County Sheriff’s Department will remain open every day of the week.”

Thomas has achieved several goals he set when he was first elected. His department has been instrumental in numerous drug arrests. School drug education programs and child identification programs have been part of Thomas’ administration. He has also worked to upgrade the sheriff’s department through equipment, increased manpower, 24-hour patrol, placing deputies in the county schools, increased salary, continued training and education for personnel.

Thomas has also established Project Lifesaver, 10 neighborhood watches throughout the county as well as a chaplain program with 10 chaplains. Thomas grew up in Goshen and attended Troy University. He began law enforcement working as a campus police officer at the university. His career with the Pike County Sheriff’s Department began as a deputy. He was later promoted to chief deputy. He is married to Jodi Pierce Thomas, a speech pathologist who works with the Pike County School System.

The couple has two children, Russ and Kati.