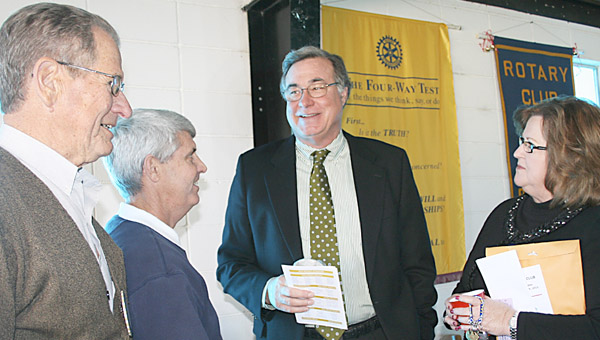 The 2010 elections wiped away the last vestige of Democrats and the days of the Blue Dog Democrats are over in the South.

“Tip O’Neill, Speaker of the House, said that ‘All politics is local.’ But that’s no longer true,” Flowers told the Rotarians. “There have been recent significant changes in Southern politics and those changes have been driven from Washington. The November elections were a historical watershed.”

Looking back, Flowers said the election of 1876 was the first national change in politics, as the South became a Democratic region.

“There has never been an enemy that bestowed such vindictiveness as was shown to the South after the Civil War. The South was held in bondage,” Flowers said. “The election of 1876 removed the shackles of Reconstruction and the South became a Democratic region.”

And, Southerners swore they would never be Republicans.

On their deathbeds, men would give two commands, “Never sell the farm and never vote for a @*& Republican,” Flowers said, laughing.

For 90 years, the Yellow Dog Democrats ruled the South. Then, in 1964, all of that changed when the five Deep South states, including Alabama, voted for Republican Presidential candidate Barry Goldwater and set a trend for the future.

In the 2010 election, Flowers said that legions of voters went to the polls and voted straight Republican tickets.

“Many of the voters didn’t even know the candidate they were voting for,” he said. “They were just voting a Republican ticket. Alabama is a Red State and I don’t see how that will change.”

Flowers also spoke briefly on the ethics bills approved by the Alabama Legislature in the special session call by Gov. Bob Riley in December.

He approved of the elimination of the double dipping of educators/legislators and called PACs a “circus” where “you can’t tell who gave to whom.”

On Dr. Robert Bentley as governor, Flowers said Bentley is “as good a man as elected to the governorship in a long time.”

“He’s as good as his word and he ran for governor for the right reasons,” Flowers said. “Robert Bentley will be good for this time.”