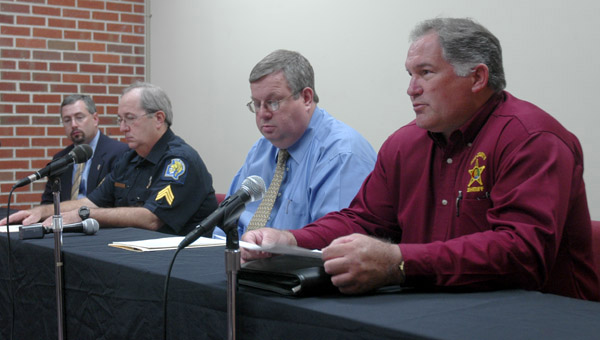 Law enforcement officers continued to search late Tuesday for the man who abducted a Troy University student from her residence and brutally assaulted her before leaving her stranded in a remote area of the county.

Sheriff Russell Thomas said the student, identified only as a 20-year-old female, walked nearly a quarter of a mile from her abandoned vehicle to a residence on County Road 7735 in the Needmore community, where she found help at approximately 1:30 a.m. Tuesday.

“Once there, she stated she had been beaten, stabbed and that her car had been stolen,” Thomas said. The woman was transported first to Troy Regional Medical Center then to a Montgomery hospital, where she underwent surgery Tuesday.

Officers believe the abduction occurred sometime after 9:30 p.m. Monday, when the victim arrived at her residence on Smith Street in Troy.

The incident ended on a remote county road, when her silver 2006 Chevrolet Cobalt ran out of gas.

“There’s evidence (the suspect) left the location walking,” Thomas said during a press conference. “So someone may have picked him up.”

Because of that, and given the area of Smith Street where officers believe the abduction first occurred, they are turning to the public for information.

“We’ve got to depend on the public for help on this,” Thomas said.

“By her being abducted from her residence on Smith Street, which is fairly congested at times, we have to believe someone may have seen something or seen this individual walking around at 9 or 10 p.m. at night.

“And it’s possible hers may not have been the first house he went to.”

Both Thomas and Sgt. Benny Scarbrough of the Troy Police Department issued a broad appeal to the public.

“I just want to reiterate that if an individual – a black male – may have been picked up or seen in the Needmore area any time late Monday or early Tuesday morning (and you have information about that) please call us,” Scarbrough said. “You can call into the Secret Witness Line or to our office and you can remain anonymous,”

Thomas echoed that for the sheriff’s office. “And we are offering a cash reward for information,” he said. That number is 334-566-4347.

Thomas offered only a vague description of the suspect: a black male, wearing a toboggan, who is approximately 6 feet tall, weighing 200 pounds.

This information was gathered from the victim at the Needmore residence, before she was taken to the hospital.

“We don’t have any reason to believe she knew the suspect, but again, we’re still investigating,” he said.

Troy University officials issued a general warning to all students, faculty and staff to take “extreme” precautions in the wake of the attack.

“The situation is very shocking, very devastating to all of us on campus,” said Herbert Reeves, Dean of Students at Troy University.

“Even though it took place off campus, it affected us deeply. “

Reeves reiterated that even though Troy’s campus is a safe one – “we’ve had only one violent crime in the last several years” – safety should be the priority right now. From using the buddy system while out to simply informing friends or roommates of whereabouts and schedules, Reeves said students, faculty and staff should use common sense.

He also urged women to be aware of their surroundings at all times and take care not to put themselves in danger.

“We need to be a little more safe while this investigation continues,” he said.

The university is offering counseling services to students affected by the news of the attack. Reeves said students could call the counseling center at 334-670-3700 or his office at 334-670-3203 for information.

Both Thomas and Scarbrough urged all residents in the county to be cautious. “We’re also asking all females in the city or county to use extreme caution,” Thomas said. “If they are approached by someone at odd hours … pick up a phone and place a call to the police.”