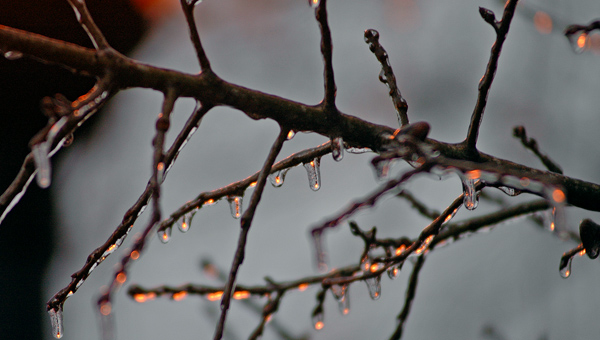 As workers in the City of Troy hunkered down in City Hall overnight Sunday, they expected the worst: an ice storm that could bring up to half an inch or more of ice to Troy and surrounding areas of Pike County.

But as the night wore on, and freezing rain continued to drizzle, they were pleasantly surprised. “We kept going out and seeing ice accumulate on the power lines, but it was never enough to break the lines,” Lunsford said. “We sent everyone home Monday morning to take a shower … and the city was open for business.”

With Pike County avoiding the damage originally forecast from the winter storm that passed through Alabama on Sunday, officials were pleased with both the response to the threat and the eventual outcome.

“We came out good,” said Cornelia Sanders, assistant engineer for Pike County’s road department. “The only incident we had was some trees down on a dirt road (County Road 7705), and they’re working on that,” she added.

Sanders was pleased. And, like most Auburn fans, she was relieved that the storm didn’t create massive ice accumulations and cause widespread power outages … the day of the BCS national championship game. “Yep. We can watch the game now,” she said laughing.

While officials weren’t making light of the situation, they were relieved on Monday to find that the ice storm hadn’t caused as much damage as originally forecast.

“We have been truly blessed,” said Britt Thomas, city manager of Brundidge. “We had pretty white, icy looking pine trees down here, but they didn’t knock out any power lines.”

By Monday morning, she was relieved to report that less than .2 inches of ice, primarily on power lines, in trees and in grassy areas. Roads and bridges had been sanded prior to the event, and the only roads closed were those operated by Pike County. The roads were open again by noon Monday.

“Although we were under the predicted ice amounts and damage reports have been minimal, I would not consider this a ‘non-event,’” Barnes said. “Each opportunity to work together for the common goal of public safety is a chance to learn and adjust our procedures as necessary for future events.”

Homer Wright, chairman of the Pike County Commission, echoed that sentiment. “You know you had to be on top of it,” he said, referring to alerts and preparations prior to the storm’s arrival on Sunday. “It’ could’ve been much worse than it was.”

Wright said county offices, including the courthouse, would resume a normal schedule on Tuesday. “We’re still encouraging residents to use caution on the roads; it’s still misty and raining.”

Pike Liberal Arts School will delay classes until 10 a.m., said headmaster Ceil Sikes. “We’re asking our faculty to be here at the normal time, but we don’t expect our students until 10 a.m.,” she said. “And because we serve so many students in outlying areas, such as south Montgomery County and Bullock County, we’re urging them to please take every precaution to be safe … if they can’t get here, we’re just asking them to please let us know.”

Other government offices all were expected to resume normal schedules Tuesday.