Marshal: Pike Lanes had been cited 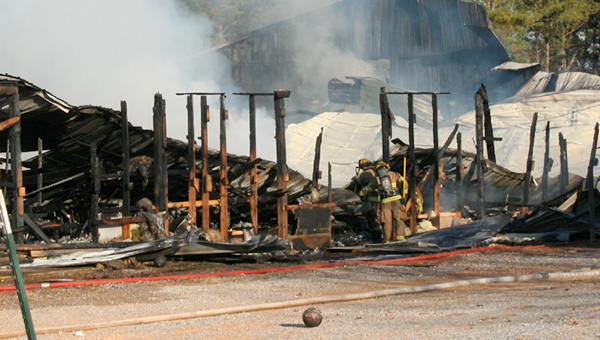 An early morning blaze on Friday destroyed the Pike Lanes bowling alley and game room. Firefighters said they worked for more than two hours to get the blaze under control.

The Pike Lanes bowling alley and gaming facility that burned on New Year’s Eve had been cited for fire code violations, according to the Alabama Fire Marshal’s office.

The facility, operated by Scott Oertel, had been ordered vacated during a December event because it was over occupancy limits and had not been brought to code standards, said Ed Paul, state fire marshal.

“There was not sufficient space to accommodate that many people and there was not adequate exit space nor safety equipment,” Paulk said. “It was problematic because the people could not have gotten out safely in an emergency. Our office ordered the building to be vacated and the owner was told building could not be used for that purpose until the building was brought into compliance”.

Prior to the early morning New Year’s Eve fire, Paulk said some work had been done on the building but not enough to bring the building into compliance.

The bowling alley and gaming facility burned in the early morning hours of Dec. 31, with the fire reported about 4 a.m. No one was injured in the fire.

Paulk said Thursday the cause of the fire remains under investigation. Interviews are being conducted and samples taken and tested.

“We are working the case and should know something in a few weeks,” Paulk said.

In addition to bowling lanes and a small gaming area, the back area of the Pike Lanes building had been used as a meeting or assembly facility. However, the state fire marshal’s office had notified Oertel, owner and operator, that the facility could not be used for that purpose until it was brought into compliance and met standards for that type occupancy.

Paulk said that the state fire marshal’s office was made aware in September 2010 that Pike Lanes was hosting parties because of fliers that were posted on the campus of Troy University.

“The fliers advertised a ‘Show and Tell Lingerie Extravaganza.’” Paulk said. “Events like that have the potential to attract large crowds.”

Paulk said the occupancy capacity for Pike Lanes was 125, including the bowling area at 52 and the small party room at 22.

However Paulk said his office was notified in December by the Troy Police Department of another event underway at Pike Lanes with overcrowded conditions.