Fountain travels to Arizona for players 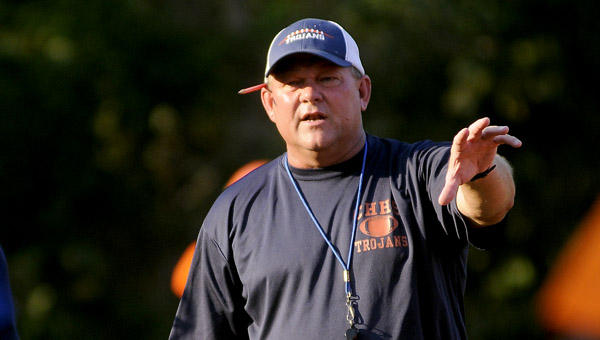 As head coach of a high school football team, Hugh Fountain has seen many of his former players go on to bigger and better things throughout their collegiate careers.

None, however, have reached the stage that Zac Etheridge is about to play on.

It was five years ago when both Fountain and Etheridge were found on the same field working toward a victory.

Now, five years later, the head coach and the former player will be in the same stadium again, hoping for the biggest victory of them all – a BCS National Championship.

“This is a dream come true for any college player,” Fountain said. “And this is something that Zac definitely deserves.”

“Obviously, the main goal for anyone coming out of high school is to go to college. For a student athlete, it is to go to college and play a sport and then to hope to be a part of a good team. To play for a National Championship is just the icing on the cake, especially for Zac who fought hard to get back to the field after his injury last season.

“I know Zac will take full advantage of this opportunity,” the coach added.

Along with Etheridge, there is another former Charles Henderson Trojan making the trip to Arizona with the Tigers in Jawara White.

Both players are good examples of what hard work and dedication can do, according to Fountain.

“Both are living examples that any kid from Troy who plays football, whether it is at the recreation level or high school level, can go places – if they work hard enough,” Fountain said.

“I remember Zac when he was a 100-pound freshman struggling to bench press 95 pounds. He knew what he wanted and where he wanted to be and pushed himself to get there. Zac worked hard for everything he has now. I was proud of what he was able to accomplish when he was (at Charles Henderson) and I am just as proud, if not more, of what he has been able to accomplish with Auburn.”

While this is not the first National Championship Fountain will attend, the game in Glendale is definitely a special one and not just because of the former players.

When Gene Chizik took the head coaching position at Auburn two years ago, he brought along many of his coaches from Iowa State.

One of them happened to be Scott Fountain, younger brother to Hugh.

Scott was with Chizik at both Central Florida and Iowa State before taking an administrative role with the Auburn program.

“To have my brother there really makes this even better for me,” Hugh said.

“We are very close and talk a lot whenever we can. To see him at this level of the game is a pretty awesome thing. He, like Zac, has sacrificed a lot to get to this opportunity and I am so proud of him.”

And it’s that brotherly bond that helped get Hugh to Arizona, as Scott provided plane tickets and game tickets.

“I got lucky,” Hugh laughed.

While there is no doubt which team will win the game come Monday night, the Trojans head coach believes the Tigers will win not because of their Heisman Trophy quarterback, but because of the safety from Troy.

“I know that when Zac is on the field, he is going to do everything to help his team win,” Fountain said. “He is going to give it all he’s got.

“Auburn is going to win because Zac plays for them.”

Troy University's Will Weathers (1) drives the ball during a basketball game between Troy University and Huntingdon College in Troy,... read more