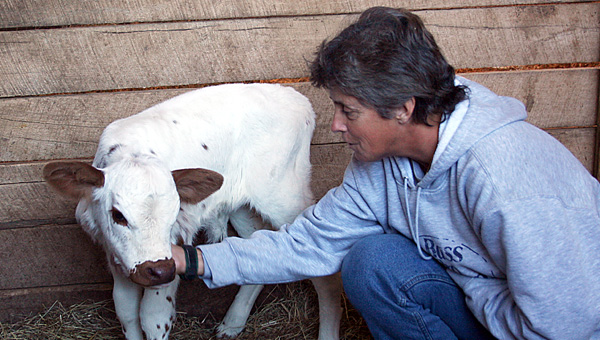 Betty Spaghetti might not have been the first baby born in Pike County on 1/1/11 but she and her sibling, Meatball, for sure, were the first twins born on New Year’s Day.

The exact hour and minutes of the twins’ birth was not recorded but Lamar Davis of the Shellhorn community arrived in the pasture shortly after their birth. He hurried back home to announce the birth of twins to “Lady” Longhorn, a mama cow that, in cattle circles, is nothing to brag about said, Davis’ daughter, Kelli Henderson.

A gully-washing rain came before Davis and company could get back to the pasture. The mama cow and one of the calves were just where Davis had left them but Betty Spaghetti was nowhere to be found.

“Twins born to cows are not rare but they are uncommon,” Henderson said. “And, most of the time, a mama cow will reject one of the twins. From what I’ve read and heard from people who raise cows, the mama cow will usually accept the smaller of the twins. Why that is, I don’t know.”

Lady Longhorn had obviously bonded with the smaller of the calves but left the other on its own.

“We had a bunch of people looking for the missing calf for more than an hour before we found her in the ditch,” Henderson said. “She might have tried to follow the mama cow or the mama might have kicked her off but either way she was left behind.”

Betty Spaghetti was taken to the barn where she would be safe and dry.

Mike Thomas opened the Goshen Farmers Co-op long enough on New Year’s Day for Davis to get a feeding bottle and powdered milk for the newborn calf.

But Betty Spaghetti’s spindally legs wobbled and she wouldn’t take the bottle.

“She needed to eat but she fought the bottle,” Henderson said. “If you’ve ever seen a baby fight a bottle then you can imagine what it’s like to try to force a bottle on a calf.”

Knowing that the calf couldn’t live without nourishment, the expertise of dairyman Neal Halsey was sought.

“Neal came over and tubed the calf,” Henderson said. “Tubing is just what it sounds like. A feeding tube is put down the calf’s throat and the food is poured in.”

“Neal said, if the tube wasn’t put in exactly right, we would know it because the calf would die immediately,” Henderson said.

She couldn’t tube the calf but her mom, Debra, didn’t hesitate.

The calf was fed through the tube on Saturday and Sunday and, on Monday morning, Betty Spaghetti took the bottle for the first time.

Henderson said hopes are that the calf has turned the corner and will continue to eat on its own.

“She’s a pretty calf and, hopefully, she’ll soon be strong enough for the pasture,” Henderson said. “We are fortunate that both of the calves lived and seem to be doing well, thanks to the help of a lot of people who were willing spend a part of their holiday helping twin calves that were born on New Year’s Day.”

Cause of fire still unknown

The remains of Pike Lanes are seen in Troy, Ala., Monday, Jan. 3, 2011. An early morning fire destroyed the... read more