Cause of fire still unknown 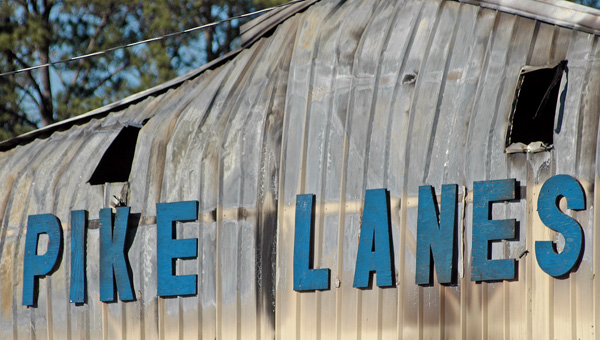 The remains of Pike Lanes are seen in Troy, Ala., Monday, Jan. 3, 2011. An early morning fire destroyed the bowling alley and gaming facility on Dec. 31.(Messenger Staff Photo/Thomas Graning)

The state fire marshal’s investigation continues into a fire that destroyed the Pike Lanes bowling and gaming facility in Troy in the early morning hours on New Year’s Eve.

When the TFD arrived, the heat was so intense that the firefighters could not enter the metal building,” said TFD Chief Thomas Outlaw. The fire took about two hours to bring under control.”

About 30 Troy firefighters responded to the fire. No other units were called.

“Pike Lanes is in our coverage area but not in the city limits,” Outlaw said. “So, the investigation has been turned over the state fire marshal’s office and we are assisting them.”

Ed Paulk, state fire marshal, said his office continues to work the scene in order to make a determination as to the cause of the fire.

“The ATF joined us Friday in the scene examination and we continue to look for the origin and cause of the fire that totally destroyed the building,” Paulk said. “It was a big fire so it’s going to take a while before we can examine the entire scene.

“When the damage to a structure is moderate, the investigation usually goes much faster but, when the damage is major, it just takes a while because much of the evidence has been consumed.”

Paulk said the Pike Lanes building was metal and the intensity of the heat caused the building to collapse much faster than would have happened with a wood structure.

Paulk said the investigation will including talking with people who might have information of interest.

Outlaw said as soon as a determination as to the origin and cause of the fire has been made, the information will be made public.

Crash cause still under investigation