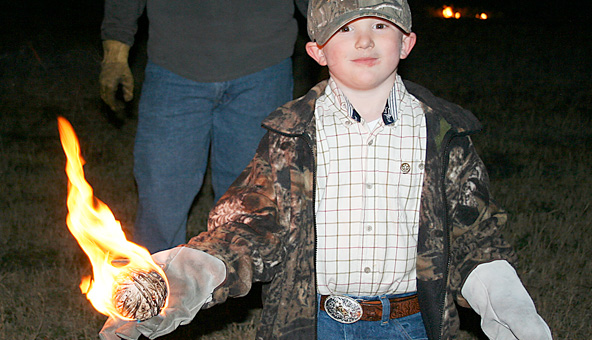 A young participant holds a fireball at the annual fireball throw hosted by the Henderson family in the Enon community.

When something fun happens, the news spreads like wildfire.

That’s exactly what has happened with the annual fireballing in the Enon community hosted by the Willie Henderson family.

For more than 20 years the Hendersons have “thrown” a New Year’s party somewhere around the coming of the New Year. Just when, depends on the weather and family commitments.

This year, the fireballing was on New Year’s Eve eve and, “fireworks” lit up the night sky like had never been seen before.

“The crowd was huge this year,” said Barbara Currie, the sister in the Henderson family. “The weather probably had a lot to do with it. Last year, we almost froze to death and then, too, word has spread about the fireballing and people come from ‘everywhere.’”

Currie said fireball throwing is a tradition that dates back to the 1920s in America but probably originated across the “big pond” as early as the 16th century.

“Fireballing is the practice of lighting kerosene-soaked balls of yarn or tightly wound rags and tossing the fiery balls outdoors at night,” Currie said. “Fireballs were probably the earliest ‘fireworks’ and we believe fireballing a tradition worth keeping.

“We aren’t teaching children to play with fire. We are teaching them about a tradition.”

Fireballing is a tradition on both sides of Currie’s family and she’s the one who winds the fireballs.

“You have to use all-cotton and it’s difficult to find all-cotton socks these days,” Currie said. “My mother told how they would sit around the fire on cold winter nights and unravel old socks and wind them into balls. But I use crocheting yarn.”

Currie starts each ball with an old cotton sock.

“I wad it up and then wind the yarn around it real tight,” she said. “When I get the ball to the right size, I start stitching. If you don’t sew the balls together, they will fall apart when they start burning. Then I soak the balls in kerosene for several months so they will burn a long time.”

Currie usually make about 25 fireballs but this year. She went the extra mile this year and made 35 but that wasn’t enough for all of those who showed up to go fireballing.

“There’s an art to throwing a fireball,” Max Bundy said. “You’ve got to scoop it up in a hurry and let it go in a hurry. Wearing gloves protects your hands but you still can’t hold on to a fireball very long.”

Fireballing can be a spectator sport like watching a grand fireworks display but most folks can’t sit on the sidelines for long.

Mike Richards and his wife, Sue, and grandson, Carson, were newcomers to the fireballing and they couldn’t believe what they were seeing.

“Before we even got there, we saw balls of fire streaking through the air and fire on the ground and a huge bonfire. It was spectacular,” Richards said. “We certainly weren’t expecting such a colorful display.”

For a while, the three Richards sat on the ground and watched.

“Not ever having seen anything like that, we were amazed,” Richards said. “People of all ages were having so much fun throwing balls of fire back and forth.”

Carson had already joined the fun when granddad decided to give fireballing a try.

“I was told that the kerosene balls wouldn’t burn your hands if you didn’t hold on to them so I threw with my bare hand and it didn’t burn at all,” Richard said. “Fireballing was a unique experience for me and a lot of fun. I didn’t know what to expect but it is a tradition worth keeping.”

Currie said the tradition will continue as long as people enjoy it. And, if Thursday night was any indication, she had better wad up a lot of socks. Traditions have to start somewhere and, for folks like Mike Richards, a new family tradition was born on the eve of New Year’s eve 2010.