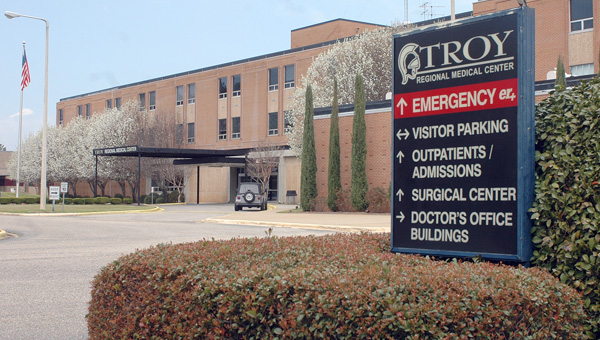 Although local health care has gone through many changes in the year 2010, Troy Regional Medical Center continues to prove excellent health care services to the people of Troy, Pike County and the surrounding area.

The biggest change in the delivery of hospital’s health care services was the ownership of Troy Regional Medical Center, which was assumed by Troy Health Care Authority in January 2010.

“Since the city of Troy took back ownership of the hospital, things are running well,” said Dr. Wilton McRae, TRMC chief of staff. “The 1 percent sales tax that the hospital is getting is bringing in several thousand dollars a month and that’s a big help. We are pleased with the direction the hospital is heading.”

The lifeblood of any hospital is its personnel and during the year, the medical community lost several outstanding physicians, McRae said.

“Unfortunately, we lost some very good doctors to other places and Dr. John Crosby, who had been with us ‘forever,’ went into fulltime retirement,” McRae said. “But then, some good things happened personnel wise. We made some outstanding additions to the medical community in Dr. Lester Littell, orthopaedic surgeon, and Dr. Craig Cole, general surgeon, and the vacancy at the Brundidge clinic has been filled by Dr. Charles Linguiti, internal medicine.”

Hospital interim administrator Teresa Grimes was named chief executive officer in the spring and McRae said she is doing a great job.

“We lost some good people but those vacancies have been filled with good people,” he said. “Teresa Grimes is providing the leadership that we need to get the hospital where we want it to be.”

The hospital’s CAREfirst Urgent Care Center opened two months ago and the patient load is increasing every day.

“The urgent care center was designed to take much of the load off the emergency room and it has done that,” McRae said. “Many of the patients who were going to the ER didn’t have an emergency but they had an illness. Those patients can now be seen at CAREfirst.”

McRae said the hospital has made several state-of-the-art equipment purchases that are making a difference in patient care.

The 1.5 MRI shortens exam time and its high diagnostic quality makes it the “gold standard” in the MRI field.

Digital mammography brings state-of-the-art technology to TRMC and now women can get the same procedures done in Troy as in Dothan or Montgomery hospitals.

“Our films are read by a radiologist at Jackson Hospital as well as by Dr. Eakes so the same people read our films as those taken in Montgomery,” McRae said.

TRMC now offers 4-D ultra sound, which is used to produce baby’s first picture but is also used as a diagnostic procedure.

McRae said the hospital board is continually looking for ways to provide the best and most efficient health care services to the people of Troy and Pike County.

“We have a great board and all of those on the board are interested in providing the best health care possible and are continually looking for better ways to do so,” McRae said. “The board is doing a good job.”

With the New Year waiting in the wings, McRae said the hopes for the future would be to recruit a GYN and a urologist to the staff and family practice physicians are also needed.

“Things are looking up at TRMC,” he said. “We made a little money last month and surgeries are up 20 percent and our census is hanging in there over what it was in 2009.

“And, we’re going to have a hospital in Troy no matter who runs it. Many of the financial problems that we continue to face are due to the large number of indigent patients that we treat. About 38 percent of our patients are self-pay which means no pay and we are not reimbursed. But looking at it another way, it’s humanitarian because, if not us, who would?”