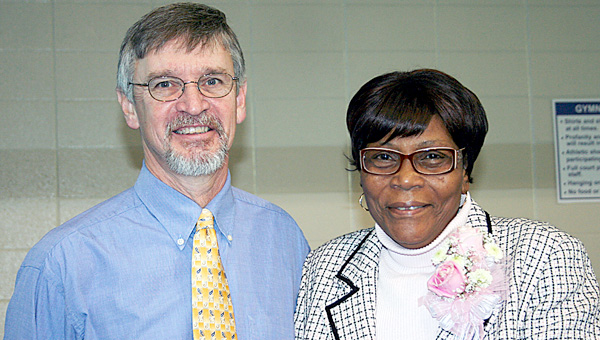 Gail Jones has been an icon of the Troy Recreation Department for more than three decades. Her retirement on Wednesday will leave a void that, perhaps, cannot be filled but her presence will continue to be felt, because, as Troy City Councilman Johnny Witherington said, “Gail Jones’ handprint and footprint are all over this place.”

A retirement celebration was held for Jones Wednesday afternoon at the Troy Recreation Center and the story that unfolded was 33 years in the making.

All of those who attended the retirement celebration for the Troy Parks and Recreation program coordinator had a story to tell about how Jones has touched their lives. Some of the stories were told from the podium and others in small gatherings of Jones’ friends as they waited to speak to her personally.

Dan Smith, Troy Parks and Recreation director, said that he knows of no one who has impacted a community more positively than Jones, who started with the Troy Recreation Department in its infancy and has nurtured it for three decades.

One after another, co-workers, friends and family members tried to sum up in a few words what Jones has meant to them personally and professionally.

To a one, they weren’t able to find words to adequately do so.

Jones’ oldest son, Chuck Jones, told of the compassionate spirit that characterizes his mom and how she has cared for the community in much the same way that she cares for her family.

“Mom spends every day caring for every body,” he said.

Troy City Councilmember Wanda Moultry told of how Jones’ caring has not been limited to her family and the many with whom she has worked at the Troy Recreation Center.

“Gail’s caring has spread all over this city,” she said.

Donald Kelly, Troy Recreation maintenance department, said Jones is an advisor and confidant who has a willing ear and whose wisdom has led many along the right path of life.

Pam Nix, Troy Recreation Department, said that Jones has a special gift, the gift of ministry, and she uses that gift to help others during their darkest times and in their deepest grief.

“The greatest measure of a person’s life is the impact that they have on the lives of others,” Nix said. “I know the measure of Gail’s life.”

Jones expressed appreciation to all who came to celebrate her retirement with her. And, as she stood at that “crossroad in life,” she had little more to say.