Trojans, young and old, train together 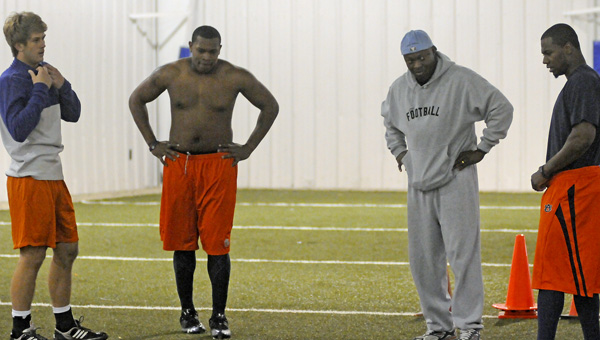 Well, almost offseason conditioning for one.

CHHS senior Corey Dennis, and Auburn players Jawara White and Zac Etheridge were all found running around cones and darting back and forth between lines with one goal in mind – be prepared for what’s next.

For Etheridge, the Auburn Tiger is just a few weeks away from playing in one of, if not the, biggest games of his life – the BCS National Championship in Glendale, Ariz.

And to be home for a few days before hand is something that is making that preparation a little bit easier.

“It feels good to be home and to be surrounded by good friends and family,” he said.

“I’m just trying to get some extra work in before we get back together as a team for the game.”

Auburn broke camp for Christmas on Wednesday and will meet back for preparations for the big game next Tuesday.

As for Dennis, being able to train with two athletes on a national championship bound team is something he could not pass up.

“Both these guys are playing where I want to be playing – they know what it takes to get there. For me, this is a great opportunity to learn and get better.”

Dennis, who just finished his senior year with Charles Henderson, will be looking to sign with a Division I program on Signing Day, which will take place in February.

As for White, the former Trojan has had a difficult year, as he puts it, with Auburn.

Before the season began, White was sidelined for the year after suffering a light concussion, which through a MRI, showed he had fluid around his spine caused by brain tissue.

Despite the injury, “Ra-Ra”, as his family and friends call him, is still training hard and developing a deeper faith in the process.

“This year was really stressful,” he said.

“But along the way, I have gotten help from a lot of people – and that has really, really helped.”

One of the people that have helped is Etheridge, who suffered a serious injury of his own.

Etheridge suffered several broken vertebra after a collision in a game that took place last Halloween against Ole Miss.

At the time, it was unknown whether he would be able to play again or not.

“Zac has talked to me a lot and really helped me find a kind of peace with it all,” White said. “We talked about how it is a sign from God to get closer to him, and that is what I have done.”

Now, White says he feels good and is focused on the rest of his career with the Tigers.

“That’s why I am here,” he said about training at his alma mater. “I want to get to a point where I can be ready to play again. Coach Atkins is someone that I have worked with for a long time. And to be back here, and working with these guys has been a lot of fun.”

Making sure players are ready for play at the next level is something that Atkins is accustomed to, as the former Troy University player and coach, has coached high school players that have gone to play at every school in the state.

“It’s all been pretty special for me,” he said. “I love to do it. I love to be with these guys – they are like the sons I never had,” he said.

Thursday was the first day of several training sessions for the players.

“You got to work hard to get what you want,” Dennis said.

“Zac was talking to us about how nothing is going to be handed to you, ever. And if you really want something, you have to get after it. I want to be able to walk down the same kind of path (as White and Etheridge), so I can’t really take a break. I have to be working as hard as I can whenever I can, and that’s why I am here.”