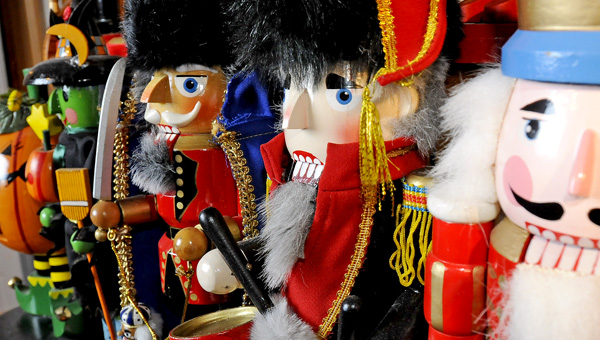 Nutcrackers are seen at the home of Sarah Bowden in Brundidge, Ala., Tuesday, Dec. 21, 2010. (Messenger Staff Photo/Thomas Graning)

Sarah Bowden of Brundidge doesn’t exactly say nuts to the history of nutcrackers, but she does come close.

Bowden has been collecting nutcrackers for more than 30 years and, as much as she enjoys history, her collection has never been about expounding on the nutcracker’s arrival in the Archaic Period when stones were used to crack nuts.

The earliest metal nutcracker is dated somewhere between 200 B.C. and 200 A.D. and the standing wooden “crackers” appeared in Germany around 1800.

All of that is fine and good but Bowden had none of that in mind when she bought her first nutcracker those long years ago.

“I really don’t even remember the first nutcracker I bought or why,” she said. “I guess it just appealed to me for some reason.”

Whatever the appeal was, it got stronger and stronger.

“Looking back at photographs, nutcrackers were sprinkled around the house a long time ago but, to put an exact date on when I got the first one, I just can’t,” Bowden said.

What Bowden can say is that, over the 30 years or more, that she has been a collector, nutcrackers have been displayed in every nook and cranny of her house during the Christmas holidays.

Bowden said, laughing, that the story character nutcrackers can be enjoyed more by boys or men … “because of the location.”

Many of Bowden’s nutcrackers are gifts from family and friends and those are very special.

“I didn’t start out making a hobby of the nutcrackers but once they became a collection, people started giving them to me,” she said. “It’s good to know that people are thinking about you.”

Giving nutcrackers as gifts is a Christmas tradition in the Bowden family. She wraps a nutcracker for each of her nine grandchildren and tries to choose ones that have special meaning.

Bowden’s grandchildren will be the inheritors of her nutcracker collection and she has written names on the bottom of certain nutcrackers.

“There are some that my children want and their names are on them,” she said. “I’ve already gotten one from my daughter, Beth, this year that I’m just tickled over. She was at Calloway Gardens and saw a purple nutcracker and purple is my favorite color. I’ve already written her name of the bottom of it.”

Although her collection of nutcrackers is not an expensive one, it is priceless in the memories that it holds.

“When I went to Germany to see my son, Ben, who was in the Air Force, he took me to the factory where they make the nutcrackers,” Bowden said. “I got a couple of them – the really nice and expensive ones – but most of my nutcrackers come from drug stores or places like that. They’re not expensive but each one has special meaning. I get so much enjoyment and pleasure from giving and receiving nutcrackers. I don’t care how much they cost or whether there is any history behind them. I’m just nutty over nutcrackers.”