Wildcats too much for Trojans 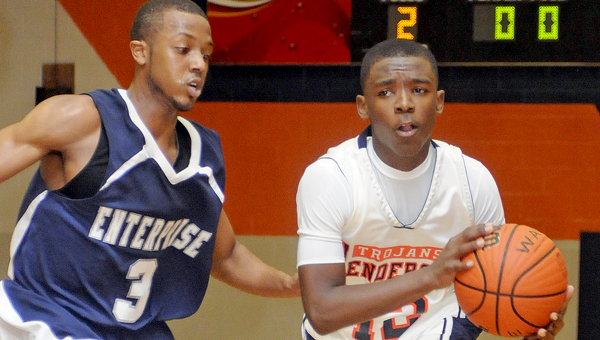 It was the same, old, heartbreaking story for the Charles Henderson basketball team Monday night.

In a rematch of an earlier game this season against Enterprise, the Trojans were looking to exact some revenge against the Wildcats at home.

However, it was not to be, as poor shooting once again doomed the Trojans, as Enterprise would win, 46-37.

“We played hard,” head coach Carl Hollis said, “But we have to play smart with our hardness.

The loss drops the Trojans to 0-10 on the season.

The first half saw both teams battling back and fourth, as there were eight lead changes.

The largest lead of the night for the Trojans came when the team took an 11-8 lead, early in the second quarter.

Enterprise would not look back from there, as it would build upon the lead, eventually getting up by double-digits, before winning by nine.

“Enterprise played the kind of game I knew they were going to play coming in,” Hollis said. “I knew they could hit 3-pointers and that’s what happened.

“They didn’t get too much scoring out of their forwards, but (Rhett) Harrleson and (Wesley) Person both hit a lot of shots for them and when you are playing them, you got to be in their faces at all times – and (Monday night), we weren’t.”

Harrleson finished with 14 points while Person led both teams with 18.

From the free throw line, CHHS was 68 percent, connecting on 17-of-25 shots. Enterprise forced 16 CHHS turnovers, as well.

“This is good competition to be facing,” Hollis said. “It’s going to make us better.

“They guys haven’t quit yet, they are still playing hard for this team. We are going to get to where we need to be soon or later.”