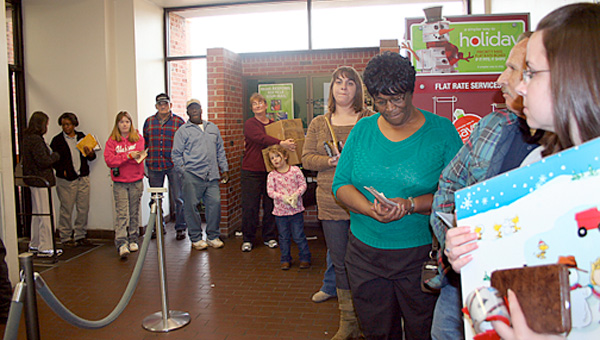 The lines are long but, fortunately, so is patience as people wait to do what they probably should have done a week ago – mail those Christmas packages.

William Nails’ smile was genuine even as he brought up the end of the line at the Troy Post Office mid-afternoon Monday. But before he could say that he was mailing gifts to his nieces and grandbaby, the end was far behind him.

Others in line in front of and behind Nails were hoping to get their packages off in time for them to arrive by Christmas Eve. The lady in front of Nails was sending packages to Oregon, Florida, Minnesota and North Dakota, her home state. The man behind was sending a package to his son who is serving in Iraq. And, most all of those who where sending packages were singing the praises of the flat rate boxes.

“The flat rate boxes are a good value and many people are using them because they don’t have to worry about how much the package will weigh,” she said.

The flat rate boxes are helping keep the post office busy but, with the 900th Maintenance Company in Brundidge deployed to Afghanistan, a lot of packages are being mailed to the soldiers.

“This year, we have mailed many, many Christmas packages to soldiers and Troy University students mailed a lot of packages before they got out for the holidays,” Alums said. “With the university post office closed, many of the international students are wanting to get their mail delivered here.”

And, there’s the general public that includes Southerners mailing packages to Southerners who now live elsewhere and miss a taste of home.

“And we have mailed sausage,” she said, with a smile. “Homemade items like pound cake and divinity candy are sent by mail all across the country. When mailing perishable goods, you have to consider time, distance and how long the food will stay fresh.”

Across the street at the UPS Store, the line wasn’t as long but the packages were stacked to the ceiling.

“Business has been steady and today has been real busy,” said Deanne Baggett, store owner. “During this time of year, every Monday is busy. People shop over the weekend and ‘ship’ on Monday.”

Baggett said UPS shipping is especially popular with those who are shipping multiple items.

“We’ll package the items and, when you are shipping several items, that’s a big help,” she said. “A lot of what we are doing now is shipping to families with a lot of presents in one box.”

Baggett said the profile of the UPS customers had changed over the last few weeks.

Even though there might be a slight wait at the post office or the UPS Store, Williams said it’s good to know that there are places that can get Christmas to those you love when you can’t.