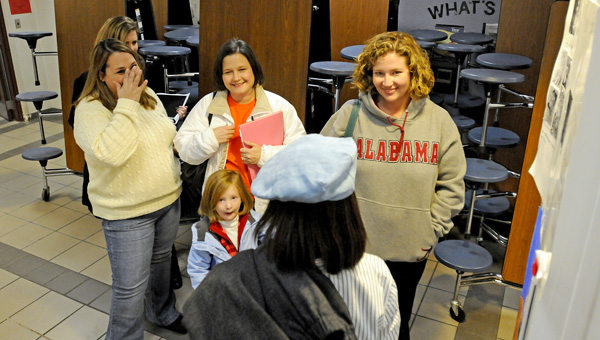 Imagine 15 fifth-grade students sitting as still as church mice while waiting for someone to push their buttons.

And, that’s exactly the scenario at the Troy Elementary School Living Wax Museum Dec. 14 and 16.

The Living Wax Museum was a follow-up project from the “100 Years of Photography” teacher summer workshop that was held in conjunction with the Holman Johnson and D.L Hightower photography exhibition at the Johnson Center for the Arts September through November.

Fifth-grade teachers Missy Berry and Lise Fayson orchestrated the Living Wax Museum as a way of demonstrating how they, as teachers, and their students benefited from the workshop offered through the Johnson Center for the Arts.

“We thought what better way to show parents what we have learned about photography than with a Living Wax Museum,” Berry said. “We asked our students to choose a noted photographer and research his life and his profession. Then, they were asked to dress as that person and actually portray him in the Living Wax Museum.”

The students who portrayed photographers, artists and writers sat at their station, which included at display of pictures and information about the particular individual.

“The students were required to sit perfectly still, freeze, until someone came to the ‘museum’ and pushed their button,” Berry said.

“When their red button was pushed, they would come to life and give their biography and then they would freeze again. The hardest part of the museum exhibit for the students was having to sit so still. I was amazed that none of them moved at all until their buttons were pushed. They did an outstanding job.”

The Living Wax Museum was open to the Troy Elementary School Parent Teacher Organization Tuesday night and Berry said the parents and teachers were impressed by what the students had learned.

“We learned a lot at the teacher workshop and then we were able to pass what we had learned along to the students,” Berry said. “We all benefited from the workshop.”

The workshop was conducted by Tara Sartorius, former curator of the Montgomery Museum of Fine Arts.

“Tara was curator at the Montgomery Museum for 22 years and she is an outstanding workshop facilitator,” White said. “The participating teachers had an opportunity to visit the ‘100 Years of Photography’ exhibition and they also learned, first hand, activities to use in the classroom.

“The purpose of the Art Bridges program is to introduce art education across the core curriculum. The Living Wax Museum is a fine example of what can be accomplished through this arts education program.”