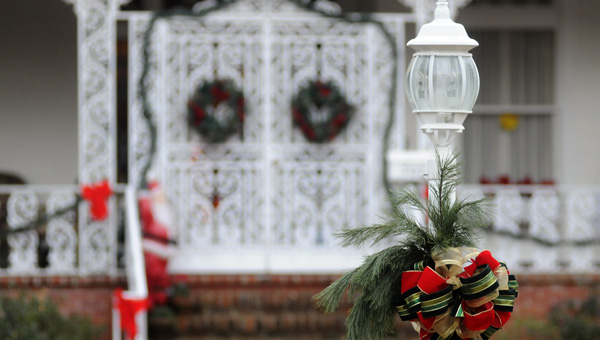 Christmas decorations are seen hanging on a house on College Street in Troy, Ala, Thursday, Dec. 16, 2010. (Messenger Staff Photo/Thomas Graning)

The College Street Historical Neighborhood Association has plans that include bringing an old-fashioned Christmas to the streets that make up the city’s historic district – College, Murphree, Walnut, Pine and China.

Ed Telfair, association vice president, said the home owners in the historic district would like to decorate for the holidays with some kind of ornamentation that would reflect the heritage of the district. That didn’t happen this year but Ed and Carla Telfair did host open house and said to their neighbors, “Y’all come.”

The open house was an opportunity for the association members to celebrate the season together in much the fashion of the “founding” residents.

College Street was bustling with neighbors hurrying in the cold to reach the warmth of the Telfair home with their favorite “to share” dishes in hand.

“It was good for all of us to get together and that is a plan of the association, for us to do things together,” Telfair said. “We want to be a historic ‘neighborhood’ and we are working toward that.”

There are 110 homes in the five-street area and 18 of the houses are listed on the Alabama Register of Landmarks and Historic Places.

“There are other homes that qualify for listing on the Register but there’s paperwork that has to be done in order to apply,” Telfair said. “The paperwork requires photographs being taken and research being done but we expect several applications to be submitted and accepted soon.”

The expanding number of homes listed on the Alabama Register of Landmarks and Historic Places will be helpful in securing grants for improvements to the overall district.

“We could qualify for grants for street and sidewalk improvements or maybe to install gas lamps along the streets,” Telfair said. “We would really like to see the utility lines run underground. There are several improvements that we could make that would enhance and benefit the overall district.”

The association’s projects to date include erecting street signs and limitation signs.

“We have a large number of children in the area so the limitation signs were needed,” Telfair said. “We have been included in the city’s plans to revitalize the downtown area. City Councilman Jason Reeves came and talked with us about the city’s long-term goal to tie the downtown area to the university campus.”

Telfair said the city has inquired as to whether the residents of the historic district would be agreeable to a walking tour of the area.

“We want to support the city’s revitalization effort and a walking tour be something that I think the association would support but improvements to the sidewalk would need to be made before we could open the district to visitors,” Telfair said.

The purpose of the College Street Historical Neighborhood Association is to preserve the residential heritage of Troy and to make sure that the area remains a residential zone in the years to come.