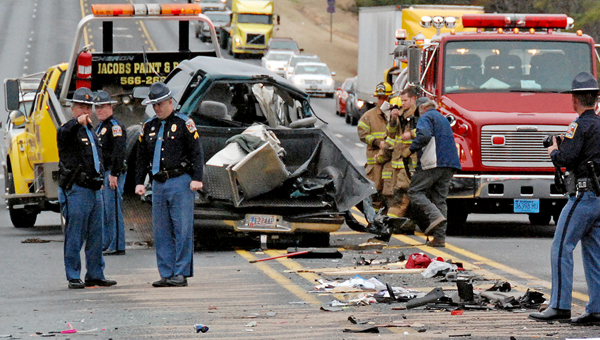 Brooke Lee Ledford 14, and Jami Alexis Pierce, 15, were killed when the truck in which they were riding crashed into an 18-wheeler just north of the Walnut Creek bridge.

Jesse Alexander Pierce, 17, the driver of the truck and a PLAS junior, was injured in the accident and transported to Troy Regional Medical Center.

Ceil Sikes, PLAS headmaster, could hardly find words to express the sadness and sorrow that enveloped the school. She fought back tears as she struggled to put words to the loss.

“We are heartbroken and truly devastated over the loss of these two young ladies,” Sikes said. “We are family and are leaning on the support and prayers of each other and the community to see us through. Lexi and Brooke will always have a place in our hearts and we’ll have such sweet and fond memories of them.”

Alabama State Trooper spokesman Kevin Cook said the crash occurred when Pierce’s 1997 GMC Sierra hit an ice patch that had formed on the bridge. The teen, who had been driving under the posted speed limit, lost control of the vehicle. It traveled into the southbound lanes and collided with a 2004 International tractor-trailer driven by David Steven Blankenship, 49, of Greensboro.

The three teens, who were not wearing seatbelts, were ejected from the vehicle. The two girls were declared dead at the scene.

The outpouring of love and concern was almost immediate as news of the tragedy spread.

“Even though the teachers were devastated, they were marvelous in helping the students begin to cope,” Sikes said. “We had counselors available and ministers from all the churches were here to pray with the students. We held on to each other and held each other up.

Sikes said because there is such a feeling of love and caring throughout the PLAS family the students and teachers found a measure of strength in togetherness.

And, we need and covet the prayers of the community for the families of Brooke, Lexi and Alex.”

Sikes asked for special prayers for Alex’s recovery and healing.

“Alex is a fine young man and Lexi and Brooke were wonderful young ladies,” she said. “Lexi was always happy and smiling. She always had a kind word for everybody. She was a good student and a member of our volleyball team and received a certificate at the sports banquet on Tuesday night. We loved having her as a part of our family.”

Sikes said Brooke was new to PLAS this year.

“We were excited to have Brooke at PLAS. She fit right in to her new environment and was enjoying the family atmosphere. She had become a part of our family,” Sikes said. “Lexi and Brooke were a part of us and this is such a tragedy, such a loss, so heartbreaking.”

As the news spread, parents rushed to the school to comfort their children and to take them home.

Exams that were schedule for Wednesday were cancelled and school was dismissed for grades 7-12.

“We were all so heartbroken and being in that state of mind, exams ….there will be time for that later,” Sikes said.

The elementary grades continued on schedule but school for all grades was cancelled today and Friday. “We won’t be back in school until January, after the holidays,” Sikes said.

Riverview Baptist Church is the church home of the three students and the church opened its doors Wednesday morning for those who wanted to come to pray.

Judith Hughes of Brundidge was traveling south on Highway 231 and saw the accident happen.

“Just before I got to the bridge (Walnut Creek), I saw this green truck fishtail on the bridge. It was coming toward me and I wasn’t sure the driver could get control so I moved over in the right lane,” Hughes said. “I still thought the truck might hit me but it kept fishtailing.”

Hughes said she looked in the rearview mirror and saw the tractor-trailer in the right lane behind her.

“It all happened so fast, I didn’t seen the impact but I heard it,” she said. “The semi turned toward the north and I thought it was going to flip but it didn’t. I saw the smoke and I knew it was bad. When I could, I pulled over and called 911 but somebody had already called because they knew.”