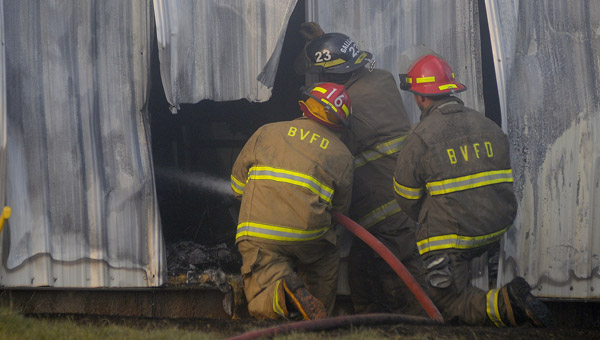 Officials from the Alabama State Fire Marshal’s Office (ASFMO) and the Bureau of Alcohol, Tobacco, Firearms and Explosives (ATF) met Tuesday morning to update the investigation into the July 12, 2010, fire that destroyed the 167,000 square foot warehouse at Carter Brothers Manufacturing Company at Hamilton Crossroads.

“A joint investigation by the ATF and the ASFMO determined the fire to have been caused by arson,” Holmes said. “The investigation into the fire ongoing and active and every day brings us closer to solving this crime.”

Holmes said only one domino needs to fall for the crime to be solved.

“Arson costs everybody and that’s why we never give up on these crimes,” he said. “The meeting today was beneficial and we are moving ahead with the investigation by talking again to people who have information of interest. We want to look at that information again and also check out a few leads that, although small, might be the tipping point. Even the smallest lead takes us somewhere. No information is useless.”

Holmes said any suspicious behavior around the plant in recent weeks could be helpful in bringing the case to a close.

Investigators from the State Fire Marshal’s Office continue to work the case and both the ASFMO and ATF are involved.