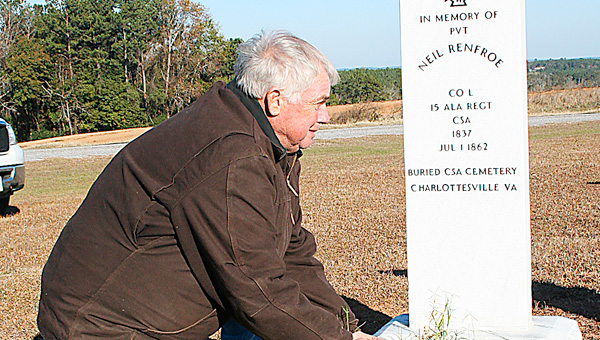 Don Renfroe kneels at the marker erected to honor his great-great-grandfather.

After 150 years apart, Neil and Sarah Elizabeth Renfroe are together again.

May they rest in peace.

Don Renfroe pushed the sod firmly into the ground and stood quietly looking at the memorial monument bearing the name of his great-great-grandfather Neil Renfroe. Next to it was the monument of his wife, Sarah Elizabeth.

“This will be their first Christmas together in 150 years,” Renfroe said it such a way that it was reverent. “Now it’s done.”

For Renfroe, the placing of the memorial monument and the laying of the sod was the end of a journey – one that strangely enough took him 900 miles along a stretch of U.S. Highway 29 from the Josie community to the University of Virginia Confederate Cemetery and back again. And, it had taken almost a lifetime to make that journey.

Renfroe’s journey started 55 years ago when he was only 7 years old. It started when he was sitting on a green shell box in front of the fireplace listening to his Granny Bess Renfroe tell Bear Tales.

“Granny would tell me and my cousins stories that were based on true events that had been told to her or things that she had experienced in life,” Renfroe said. “It was oral history at its finest. And, it was there that my curiosity kicked in and I started to formulate the fact of who I am and where I came from.”

As he got older, Renfroe became more curious about his family and wanted to know more about the people “that I came from.”

“Based on what I was told by family members, I could put everything in order up through my great-granddaddy Pleasant Green Renfroe,” Renfroe said. “But nobody could tell me anything past him.”

During one of Granny Bess Renfroe’s Bear Tale sessions, Renfroe’s great-uncle, Dewey Renfroe, and his granddaddy Ed “Old Dad” Renfroe passed along a bit of information that caught Renfroe’s ear.

“They said that their granddaddy fought and died in the Civil War but they didn’t know when he died, where he was buried or even his name,” Renfroe said. “But Granny Bess said that his wife’s name was Rebecca Williamson.

“Old Dad and Uncle Dewey said, from what they had heard, three Renfroe brothers, Enoch, Andrew and Jim, left Kentucky and went to Florida but didn’t like it there and started back to Kentucky but only made it as far as Pike County.”

With that information, Renfroe set about putting together the family history puzzle but, for a long time, couldn’t make the pieces fit.

Around 1971, he met and became friends with a noted Bullock County historian, Dean Spratlin.

“Dean had piles of information on almost every family in the area but not much on the Renfroes. And some of what he had was wrong,” Renfroe said. “We looked for Civil War records for Pike County but nothing turned up that would connect me. Dean encouraged me to write down what I had heard or found. He said one day it would all come together.”

Spratlin also told Renfroe that although oral history is good and the event truthful, that often when things that are handed down – the times, places and even names could be changed by mistake.

“He was so right,” Renfroe said.

As a young boy and growing boy, Renfroe had visited cemeteries with his grandmothers and had visited the Renfroe Cemetery with his Grandmother Hixon who was a Renfroe before she married.

“But, Granny Renfroe told me that we were not kin to the Renfroes in that cemetery,” Renfroe said. “I took her at her word.”

Renfroe had not been to the Renfroe Cemetery in many years but fate played its hand.

“One day I had to go to Bonnie Plant Farm’s office in Union Springs,” Renfroe said. “As I was doing my business, the lady helping me asked me just how many Renfroes there were and were we all kin. I told her all Renfroes are kin. I just couldn’t figure out how.”

On his way home all the “history stuff” was going through Renfroe’s head. He stopped at once again at Liberty Cemetery and Sandfield Cemetery but found nothing new at either place.

“When I got back in my car I was thinking if only I could find a clue,” Renfroe said. “I thought about what Dean had said – that things can get changed in oral history. Names can be spelled wrong, people can use nicknames on official documents. All kinds of stuff to throw you off. I thought about Granny telling me that we were not kin to the Renfroes buried in the Renfroe Cemetery. And, I thought maybe, just maybe.

“I had my man and it was right under my nose all that time,” Renfroe said.

He went home and within minutes he found that Neil Renfroe had died of a sickness caused by measles and was buried in the Confederate cemetery in Charlottesville, Va.

“Neil Renfroe was my great-great-granddaddy and I had never heard his name before,” Renfroe said. “I later learned that three brothers did come from Florida to Pike County around 1850 but their names were Enoch, Neil and Thomas. They enlisted in the Civil War together at Perote and were placed in Company L 15th Alabama Infantry Regiment and were sent to fight in the North Virginia Army of the Confederate.”

Neil Renfroe died in a hospital in Charlottesville. Thomas also died in Virginia. Enoch got his leg shot off at Gains Mill, Va., but came home to Pike County to father a large number of children.

“Neil Renfroe died at age 24 and left behind three children, Pleasant Green Renfroe, my great-granddaddy, and two sisters. My granddaddy was Jessie Edgar Renfroe and my daddy was Max Buffford Renfroe and I am Donald Edwards Renfroe and that’s where it ends. I don’t have any sons to carry on the name.”

But that’s not where the story ends. Renfroe couldn’t let it. He had to go to Charlottesville and put his finger on the name of the man he had been searching for all his life.

He and his wife, Susan, made the journey and the visit to the Confederate Cemetery was an emotional one for Renfroe.

“When I put my finger on his name it was – emotional,” Renfroe said. “But there it was, the answer that I had been looking for since I was seven years old.”

Neil Renfroe was buried in a mass grave with 1026 other Confederate soldiers. Somewhere under those acres of sod was the body of Don Renfroe’s great-great granddaddy.

Renfroe took a scoop out of the car and gently removed a clump of turf. Neil Renfroe was finally going home.