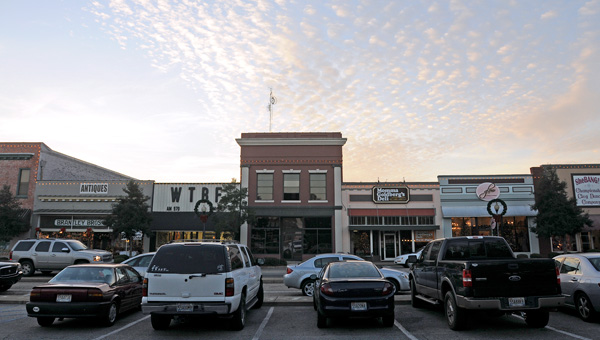 The Pike County Chamber of Commerce’s Downtown Revitalization Committee has been devoted to Troy’s downtown for years, but there are a few of those members taking things a step further.

The group, composed of some members of the chamber’s downtown committee, the university and the city of Troy, unofficially call themselves the “Oxford group,” after a visit to the downtown of Oxford, Miss.

“We heard good things about the growth of their downtown, and the mayor over there told us at one time at 5:30 on a weekday you could have shot a gun across the square and not hit anybody, and it’s really grown since then,” said Jason Reeves, Troy City Councilman and member of the downtown committee.

The group, which has only been meeting for the last four months, is still working to define its long-term goals.

But in the meantime, its members do know one thing for certain: downtown is destined for growth.

“What we are trying to do is make sure we capitalize on the momentum of what’s going on downtown,” Reeves said.

“We’re just trying to make sure we capitalize on the new excitement, interest in downtown,” Reeves said. “We want it to be a destination for people to come eat, shop and enjoy the sites.”

Scherr Qualls, owner of Douglas Bros. Jewelry and chairman of the committee, has seen Troy’s downtown take many forms.

Growing up in his family business, which has been on the square since 1871, Qualls said he agrees Troy’s downtown is evolving.

“It used to be primarily retail, which it still has a lot of, but it’s evolving into more dining opportunities, loft apartments … and many professionals are moving onto the square,” Qualls said.

Another key difference in downtown is that the Square is no longer all there is to it.

“We are wanting to think of downtown as more than just the square, even though that’s the heart,” Reeves said.

And, with the Troy Public Library moving to Elm Street and Troy University’s purchase of the Park Lane Shopping Center, Reeves and Qualls said downtown is set up to accomplish a city goal — integrate the university and downtown.

“The university and downtown are growing together, and the university has made great advancements toward that with the purchase of the Park Lane Shopping Center,” Qualls said. “There is also Ms. Colleen’s and several other businesses along South Brundidge Street, and that’s just bridging the gap between us.”

Reeves said the future Troy Public Library will face the mouth of Walnut Street, something he said will open doors for growing Walnut Street development toward the square.

“It will be facing downtown, and we see it as a part of downtown,” Reeves said. “Basically we’ll try to expand that a block at a time.”

Reeves said another aspect in the group working to form its long-term plans has included several visits to other local organizations.

“I have talked to College Street and Murphree Street’s Historical District … we just want to gather some ideas and see what people want out of their downtown,” Reeves said.

“We don’t want to turn downtown into something people aren’t excited about.”

Reeves said he believes part of the group’s goals will be to work with property owners of underdeveloped or undeveloped land and try to help enhance the areas.

Qualls said the group is also working toward possibly having downtown declared a historical district, something that could provide more incentives for businesses looking to be a part of downtown.

While the group is working on developing downtown, Reeves said the purpose is not to undermine the restaurants and businesses along U.S. Highway 231.

“We certainly don’t want to distract from the highway, but we want to make sure people have options,” Reeves said.