CHHS drops to 0-7 with loss to Jeff Davis 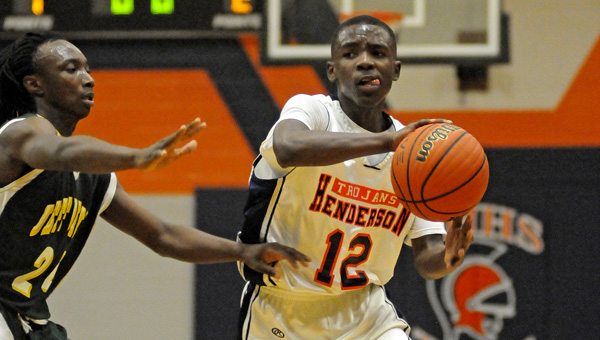 Another game played, and another loss recorded.

The Charles Henderson Trojans entered its matchup with Jeff Davis winless at 0-6, and after 32 minutes, that was the way the team stayed.

In its second home game of the season, CHHS was hoping to right the wrong, however, after a first half that saw the team score just 16 points thanks to 4-of-16 shooting, 25 percent, the Volunteers of Jeff Davis were able to build a substantial lead and one that proved to be too much, as it cruised to a 60-43 win on the road.

“We didn’t play at all for a half,” head coach Carl Hollis said following the game.

“We didn’t execute the offense, we weren’t patient, we didn’t penetrate, we didn’t push the ball down the court. We refused to do the things that we practice.”

By half time, Jeff Davis had taken a 35-16 lead, thanks to 25 points in the second quarter.

The Trojans were outscored 15-9 in the third, facing a 25-point deficit heading into the final quarter of play.

One bright sport for CHHS came in the fourth quarter, as the team outscored the visitors, 17-10, but it was little to late for the Trojans.

“I think we played a little bit better in the fourth quarter, but when you are down by 30 points there is not much you can do to get back into the ball game,” the coach said.

“You can’t win a game with one good quarter. We have to keep working hard. We got to be self-critical right now and see what is not working so we can get better.”

For the game, CHHS shot just 26 percent from the floor, connecting on 9-of-34 shots, while shooting 22 percent from beyond the arc, hitting 5-of-22 3-pointers.

The Trojans missed all nine of its 3-pointers in the first half.

Michael Zackery lead the team with 20 points, while Da’Vontez Jackson finished as the second leading scored with eight points. The 43 points are the second lowest in the season, only to the Trojans’ game against Enterprise, when the team scored 32 points.

“Jeff Davis out hustled us, they out worked us, and they out played us.

“They didn’t bring too much pressure at us, but you can make any team look great if you are not doing what you are supposed to be doing. If these players want to keep doing what they have been doing so far this season, they can expect to go 0-25, and that’s what I told them. They have got to realize what it takes to be productive at his level – and so far I haven’t seen that yet.”

The Trojans will head to Greenville today looking to avenge an earlier loss to the Tigers. Tip-off is set for 4:30 p.m.