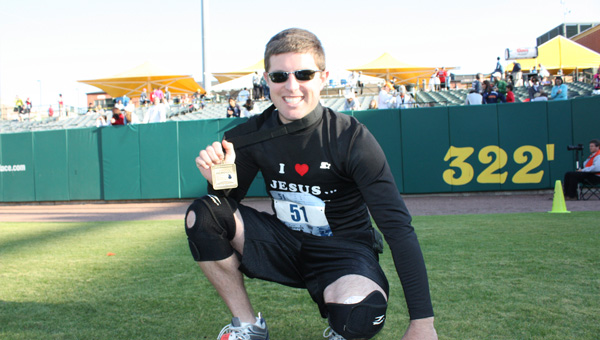 Less than 1 percent of people in the world ever complete a marathon, but one of Troy’s own joined that group just last week.

Justin Abercrombie, Troy Bank and Trust assistant vice president and loan officer, not only completed the 26.2-mile trek — he did so with a cause.

And, if it wasn’t for the cause, Abercrombie may have had a harder time finishing the St. Jude Memphis Marathon in 5 hours and 23 minutes last Saturday.

Abercrombie doesn’t have a particular tie to St. Jude Children’s Hospital, focused on research to cure diseases for children. He just has a “heart for kids.”

Though Abercrombie has always wanted to run a marathon, he hadn’t been training too long before Dec. 4. In fact, prior to the middle of September, the most exercise the banker did regularly was walk three miles a day.

Jumping on the marathon journey with Jeremy and Rachel Dykes, his cousin and his cousin’s wife, who had both been training for two months more than Abercrombie, he had some catching up to do.

“I went from walking three miles a day to running my very first long run when I trained with my cousin and his wife, which was 12 miles,” Abercrombie said. “I had to catch up with them.”

Abercrombie won’t hold back in telling you he started to question his decision after that first day.

“It was tough. It felt like I was having to run across the U.S.,” he said. “My feet were hurting me. I had to go to the doctor about my feet. My whole body was just sort of in shock.”

But, Abercrombie came a long way since that first day of training.

It took him all the way to 18 miles of his run before he became tired.

“The first 18 miles was fun, but after that it got so bad,” Abercrombie said. “I started getting horrible cramps in my legs. I had to partially walk until they would give up a little bit and then I’d jog as far as far as I could and then stop again.”

Though the journey wasn’t an easy one for him, he said there were two things that kept him going.

“The first was we ran through St. Jude hospital and a lot of the kids came out and had signs for us,” Abercrombie said. “The second thing was other people being there with you while you’re running.”

In addition to Jeremy and Rachel, Abercrombie also ran with Rachel’s twin sister and her husband, Sara and Brian Gill.

In the two months Abercrombie spent training for the marathon, he said he got some funny reactions.

But the last half mile of his race, as Abercrombie approached the finish line, all the cramps and all the crazy looks were far out of his mind.

“It was a great feeling. I had accomplished something I’d always wanted to achieve,” Abercrombie said. “It seriously was one of the things I wanted to do before I died, and now I’ve done that.”

But, laughingly, Abercrombie said that doesn’t mean he’s ready to hit the bucket just yet.

While Abercrombie still recovers from his soreness a week later, he can’t quite think about doing it all over again. “It’s too early to tell right now.”

One thing Abercrombie said he will gain from his experience is to keep running more regularly — “regularly” being about three miles at a time.