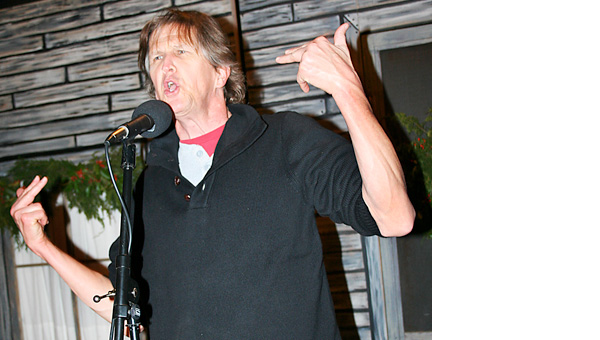 Les Jackson of Brundidge used a quote from storyteller Andy Offutt Irwin to describe Irwin’s performance at the We Piddle Around Theater over the weekend.

“It was all good,” Jackson said, with a chuckle. “Andy Irwin’s old Southern lady voices of his Aunt Marguerite and her friends are so much like voices that I’ve heard all my life – proper ladies and ladies of some means. He’s a hoot. His concert was a fun night.”

For Phil Kelley of Troy, his experience at the We Piddle Around Theater was wonderful, “One of the best night’s I’ve ever had.”

“I’ve never laughed so much in my life,” Kelley said. “I mean this guy was wonderful. He kept the audience entertained from start to finish. And kudos to those kids who played the pre-show and the chili was wonderful. The entire night was just a lot of fun. And, the theater – it’s unbelievable what those folks have put together. I’ve already marked my calendar for January 5. I want to make sure I get tickets for the Pike Piddlers Storytelling Festival. This storytelling is something that I really, really like.”

Wiley White, also of Troy, had heard Irwin before at the Pike Piddlers Storytelling Festival.

“That’s why I wanted to hear him again,” White said. “I love his Aunt Marguerite voice and then he turned around and played the guitar and sang and whistled. He is extremely talented in so many way.”

However, it was the many impersonations that White said set Irwin apart from other storytellers.

“He’s got accents down pat,” she said. “He can do different old Southern ladies’ accents and then do teenagers — I loved the college boy’s mating call — and rednecks. He is absolutely amazing. He can be serious but he’s mainly funny and he’s so uninhibited like a jumping jack toy. And what he said about the theater was fantastic and I agreed with him.”

Irwin said that he travels all over the country and the We Piddle Around Theater is the best theater he had seen.

And, the BHS storytelling committee loves having Irwin.

“Andy Irwin is one of our favorite tellers because he has become a part of the We Piddle Around Theater family,” said Linda Steed, a committee member. “We make it our goal to have the best storytellers available and he is a always a crowd-pleaser and we want him to come back.”