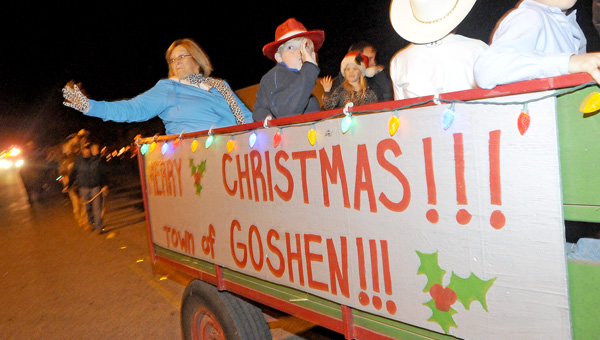 The Christmas spirit has officially hit the City of Goshen.

Friday night hundreds gathered in and around downtown to watch and take part in the annual Christmas parade. And as one could imagine, there was quite a bit going on.

Cars and floats alike began lining up at Goshen High School 45 minutes before the parade, and one of those participants was the high school’s athletic director, Bart Snyder.

Snyder, along with student athletes from the high school, were on a decorated trailer that was a part of the parade.

For the coach, being involved with community, especially during the holidays, is something that is always enjoyable.

“We really have a great community here and one that always enjoys gathering together to celebrate,” Snyder said.

The theme for the parade itself was “Christmas the Cowboy Way” and as one of the people who help make the parade possible, Traci Shaver, had her hands full but was a having fun at the same time.

“This is always a fun time of year,” she said.

“It started four or five years ago and has gotten bigger every year, which is always really great to see.”

As far as the theme goes, Shaver said the Christmas Committee was looking for something different this year, and that’s how the cowboy way came about.

“It’s something fun that everyone can enjoy,” she said.

“Some people will be riding in the parade on horseback and others will be doing different things to play along with the theme.”

Before the parade, a T-shirt contest was held for the festivities with Bella Paramore, a second-grader from Goshen Elementary, winning the contest.

While activities were going on outside, the same could be said for things inside, as there was a campstew cook off going on before the parade as well.

“We have been having a lot of fun in here,” Carter Sanders said.

Sanders was an organizer for the cook off, which saw all its funds go to the Goshen Senior Center.

“It’s been hectic so far, but we have seen a lot of people come in and enjoy themselves. This is something that happens once a year, so everyone is having fun.”