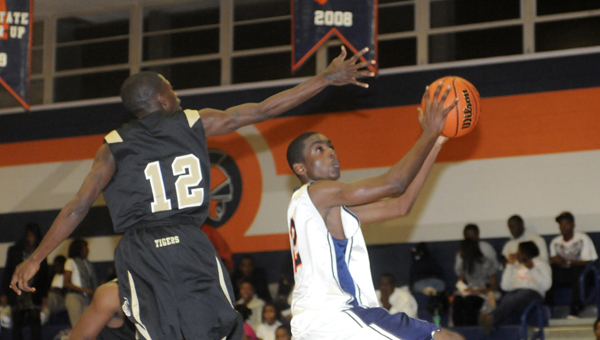 Trojan forward Da’Vantez Jackson goes in for a lay up in the beginning of the second half of Charles Henderson’s game against Greenville Thursday night. Photo/Greg Rossino

For the first time this season, the Charles Henderson Trojans were playing basketball on its own court Thursday night.

But in the end, even with their fans cheering behind them, the Trojans were unable to get their first win of the season as Greenville came into town.

After three competitive quarters, it was the Tigers who were able to pull away in the fourth, and take the victory 56-49.

“Fatigue got us in the end,” Trojan head coach Carl Hollis said after the game. “We were tired.

“We looked tired even before the half time and that is something we are going to work on in practice. I thought we played hard though. We are showing that we are improving as a team, but we still have some things to work on.”

The loss drops CHHS to 0-6 on the season.

The Trojans were able to get off to a fast start in the beginning of the game thanks to its 3-point shooting, however, it would be the team’s inability to make a field goal from inside the arc that would eventually doom them.

Senior forward Michael Zackery led the way for CHHS, scoring 12 of the team’s 21 first half point, as the Trojans trailed 24-21 entering the break.

In the third quarter, again both teams went back and fourth, as there were four different lead changes.

That would be the closest the Trojans would get.

In the final eight minutes of the game, the majority of the CHHS points scored came from the free throw line, until a Tyler Mitchell 3-pointer with close to three minutes left, but by that point, it was too late.

Greenville would eventually take a nine-point lead, before finally winning by seven.

“Greenville is similar to a lot of teams we have seen this season,” Hollis said.

“I thought that we had some good opportunities but we didn’t shoot the ball well at all, and that is something that cannot happen. That shows me that we haven’t learned the offense just yet and that we need to be more patient with the ball and unselfish.”

For the game, the Trojans shot 19 percent from inside the 3-point line, making just 6-of-its-32 shots.

From beyond the arc, CHHS was not much better, shooting 36 percent, connecting on 9-of-25 shots.

Zackery led the way with 20 points, while Mitchell and Devin Davenport added 13 and 10 points, respectively.

“These are the kinds of growing pains we are going through right now,” Hollis said.

“We need to start making better decisions with the ball and the guys need to find their roles. We need to find out how are shooters are, who are rebounds are, who are role players are. That is important for this team right now. We are getting better, but once we figure everything out, we are going to start playing to what our potential should be.”

CHHS will be back in action on Dec. 10, as it plays host to Jefferson Davis.