Coppages live in a house divided 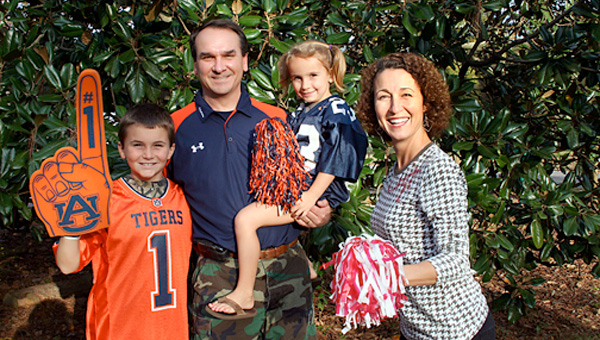 No matter who wins the Iron Bowl today, the Coppage house will be divided, but not equally. Daphne will be out numbered by her husband, Bo, and children, Cole and Elsie Claire. When it’s all over but the shouting, Daphne is sure she’ll be the one shouting, “Roll Tide!” and Bo and the kids are betting three-to-one that she won’t.

Alabama fans may call Auburn the “Cow College” but this football season, the Tigers have got a lot to moo about.

They are sitting in the catbird seat atop the SEC West with an unblemished won/lost record. The Tigers are headed to Atlanta to play South Carolina for the SEC Championship and, with a win, they’ll have a legitimate shot at the National Championship.

Alabama found itself in the same position year and went on to win the SEC and the National Championship.

For a whole year, Daphne Coppage has been saying “Roll Tide” with pride and her husband, Bo, has had to grin and bear it.

But “Bo knows” that come late afternoon today, the Tide will have turned and it will be his wife who will be wearing a forced, fake grin.

The Iron Bowl will get under way at 1:30 p.m. today and the couple will part ways until the final whistle blows. Then, one of them will assume the braggin’ rights and offer the other the crying towel.

“Auburn will win,” Bo said with assurance. “Alabama’s favored but that’s because the game’s in Tuscaloosa. It will be a good game, but Auburn will win 35-24.”

Daphne disagreed. “Alabama’s going to win. The game’s at home and Alabama will be fired up. Auburn’s undefeated but that doesn’t matter because it’s Alabama and Auburn.”

Daphne said she is a little disappointed that Alabama has lost a couple of games this season, but right now all of the marbles are on this game.

“I grew up in a family that bleeds ‘crimson.’ It’s a tradition with us,” she said. “Bo being for Auburn just makes the football season even more fun. We pick at each other and Bo likes to make smart remarks, but that’s all right. Bama won the National Championship.”

That was a hard pill to swallow for her husband and he found a way to give her a hard time. “I told Daphne that Alabama wouldn’t have won if Colt McCoy hadn’t gotten hurt,” Bo said. ‘But really, Alabama probably would have won anyway.”

But Bo didn’t see any need to tell Daphne that so he kept it up and that put a lid on some of the bragging.

And, if Auburn wins today, Daphne “probably” will say that the Tigers couldn’t have won without Cam Newton.

Although they both like to “talk smack,” they each know who they’ll be looking at across the breakfast table every morning.

And Daphne said that “you never know what will happen” when Alabama and Auburn tee it off and her hopes are that Alabama will win. “But I would rather Auburn win the SEC than any of the other teams,” she said, with tongue in cheek.

Tonight when the dust settles and differences are put aside, Bo Coppage will probably lean back in his easy chair and tell his wife how it was that he became such an Auburn fan.

He’ll tell her how as a schoolboy, he went with Dan Dykes and his parents, Frank and Lois, to the Auburn football games and how Dan’s mother could make the best barbecue sandwiches for tailgating. He’ll tell her about the excitement that he felt when he saw the War Eagle circle the stadium and how it turned him orange and blue.

Daphne will tell him that she and her family share a passion for Alabama football and how, over the years, they have lived and died with the Tide. She’ll tell him how she feels when the stadium rocks and 90,000 voices strong yell, “Rooooll Tide!”

And, then one of them will grin and the other will bear it. That’s the way it is in a house divided and how it will be for the year to come.