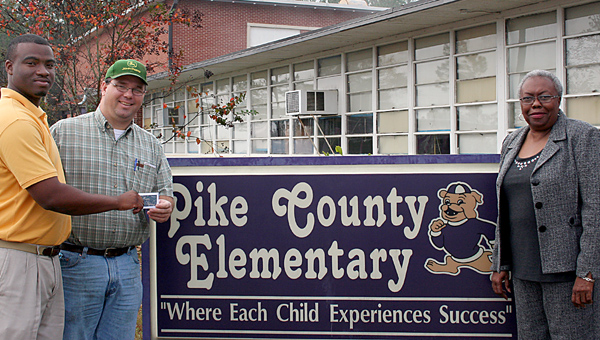 Willie Wright, Pike County Elementary School principal, presented a $500 gift certificate to John Witherington of Troy. Witherington was the winner in a raffle to raise money for an air conditioning unit for the schoolÕs gym. Isabell Boyd, a member of the fundraising group, expressed appreciation to the community for its support.

John Witherington was pulling the chains at a peewee football game, when a woman approached him asking him to make a donation on a chance to win a $500 Wal-Mart gift certificate.

“Halftime was ending and we were going back on the field when the lady stopped me,” Witherington said. “I like to support efforts like that so I said, ‘sure.’ The tickets were five dollars and that’s what I had in my pocket. If I’d had $20 I would have bought four tickets.”

Witherington went back to pulling chains and didn’t give the donation another thought.

“Never in a hundred years did I expect to win,” he said, laughing.

But, when the winning name was drawn, it was his.

Isabell Boyd, a member of the fundraising team, said the team had some difficulty in reaching Witherington but, when they did, he was more than surprised.

“I was just proud to make the donation because it is a worthy cause but it’s nice to win,” he said with a smile.

Boyd said the need for air conditioning in the gym is great.

“During the summer program, it was about 100 degree every day in the gym and that’s too hot for anybody to be able to do anything and enjoy it,” Boyd said.

“When we have programs in the gym, it gets so hot at times that it’s difficult for parents and grandparents to come to see their children perform,” Wright said. “The cost of the air conditioning will be about $25,000 and the drawing for the Wal-Mart gift certificate brings us another step closer.”

Boyd said many people have been involved in the fundraising efforts and cited Diane Smith and Geneva Rodgers as helping to spearhead the efforts.

“We have had support from local churches, alumni, the Brundidge Rotary Club, Sen. Wendell Mitchell and Rep. Alan Boothe, Wal-Mart and in-kind services from the Printing Press, so it has been a community effort.

Boyd said other fundraisers are in the planning stages, one of those is a play that was performed in Brundidge in 1964.

“We hope to bring ‘The Slab Time Convention’ back to the stage,” Boyd said. “It’s a hilarious play and some of us who were in it in 1964 are still around so it’s going to be a lot of fun.”