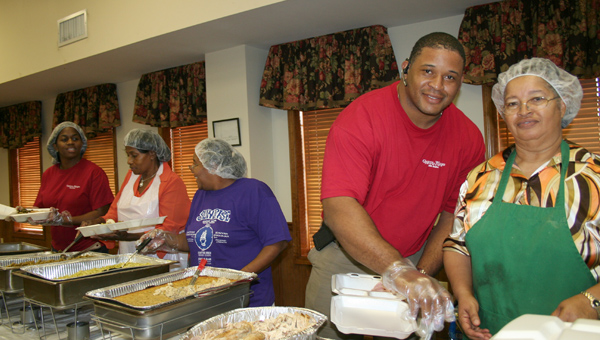 Former NFL star Cornelius Griffin, above, hosted his annual Thanksgiving dinner for the elderly, sick and shut-ins on Tuesday. Griffin said he has been "blessed" and feels honored to share those blessings with his hometown of Brundidge. (Photo/Jaine Treadwell)

When Cornelius Griffin retired from the National Football League following the 2009 season, there were many opportunities available to him but he chose to come home – back to Brundidge and Pike County.

Griffin played 10 years in the NFL. He as drafted by the New York Giants and ended his professional football career with the Washington Redskins.

Many times he stood in stadiums all across the country and heard the cheers of a hundred thousand of more.

“Honestly, it wasn’t the cheers that I thought about,” he said. “The blessing was that I was living my dream of playing football. That’s what I wanted to do. That was my dream.”

That dream began to take hold among the home folks at Bulldog Stadium and it is those people, who supported and encourage him as a young man, that Griffin cannot forget.

Even though his football career has ended, he still remembers the cheers of the home folks and those are the cheers that matter the most.

And, it is for those home folks that Griffin continues to host a Thanksgiving dinner for the elderly citizens and sick and shut-ins on the Tuesday before Thanksgiving. It is his way of giving back to his community.

He didn’t even think about not having the Thanksgiving dinner this year.

Just because he’s home doesn’t mean that he has forgotten who he is and where his home is.

“Last year was the first year that I got to be here for the Thanksgiving dinner and being here really meant a lot to me,” he said. “It was a blessing. This year, I’m here as part of the community. I came from a good home and a Christian background so, when I retired from football, I wanted to come back home and be a part of the community and I wanted to do it the right way. This is the right way and I am blessed to be a part of it.”

The Thanksgiving dinner has become a community event and Griffin said he would like to thank all of those who are a part of making Thanksgiving special for so many.

More than 400 dinners were delivered to homes and a large number of people had dinner at Brundidge Station.