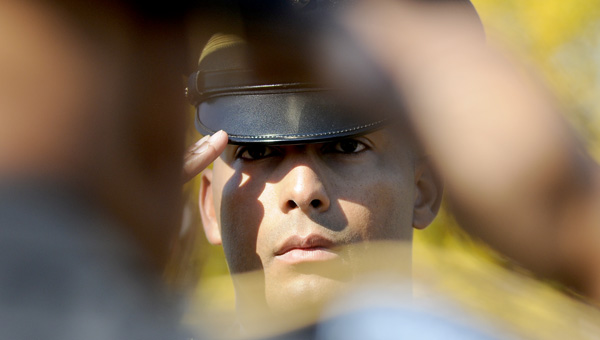 A member of Charlie's Angels in silhouetted by another member during the 2010 American Legion Post 70 Veterans Day Program at Bicentennial Park in Troy, Ala. (Messenger Staff Photo/Thomas Graning)

It looms over Highway 231 at the Brundidge Street intersection — a flying shark, a landmark, a piece of military history without the story. Until the 29th annual Veteran’s Day Program at Bicentennial Park.

At this year’s program, American Legion Post 70 Commander Bob McLendon announced the dedication of a marker chronicling the history of the Cobra gunship helicopter, which has been a local fixture since 2001.

A warm, sunny day and upbeat big band music provided the perfect backdrop to this year’s program, which began at 11 a.m. Thursday. About 250 members of the community gathered at the park to celebrate the city’s veterans.

After the pledge of allegiance and the National Anthem, which was sung by Pike Liberal Arts School eighth-grader Catherine Crowe, Mayor Jimmy Lunsford gave a brief talk in which he praised the efforts of men and women in military service, and the large turnout.

“It’s absolutely wonderful to see so many young faces and young people,” he said. “I would encourage each of you to pass this patriotic spirit down through the generations.

The event’s guest speaker was USA retired Staff Sgt. Steve Lowery, who gave a detailed discussion of the origins of the Cobra helicopter. The copter was primarily a gunship in Vietnam, where it was damaged and sent back to the U.S. It was later flown in Desert Storm, and according to information on the new marker, it was in active service until 2001.

Veterans from two families were also recognized at the event. Jack Davis and Samuel Townsend, both deceased veterans, were honored in memory with engravings on a wall of names at the park monument and a flag planting on the Avenue of Flags. Members of the families of each veteran were present for the recognition.

The Avenue of Flags is a tribute to military veterans who have died either in active combat or after their service. 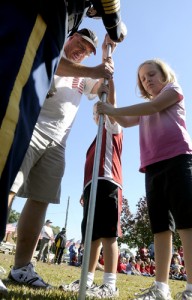 Chuck Railey, left to right, Cada Railey, 7, and Sarah Railey, 9, with the help of a member of Charlie's Angels, place a flag in honor of relative Samuel Townsend during the 2010 American Legion Post 70 Veterans' Day Program at Bicentennial Park. (Messenger Staff Photo/Thomas Graning)

At the park Thursday, more than 360 flags snaked through sidewalks and trees as a reminder of those who have given their lives and the families they’ve left behind.

Joyce B. Austin, a former member of the Citizens Advisory Committee, which is no longer in operation, was the force behind the beginning of the Avenue of Flags. After visiting other veterans’ sites, she saw other flag tributes and wanted to bring something similar to Troy.

Austin’s husband, Raymond M., served in the Air Force in WWII and in the Army in the Korean War. Her father also served, she said.

For McLendon, the event and the showcase of the Cobra helicopter is a way to honor veterans.

It’s also a timely recognition of an artifact that survived years of war—and now stands sentinel over Troy. There are only a handful of Cobra helicopters on display around the country, to McLendon’s knowledge.

“This represents a part of our history,” he said.