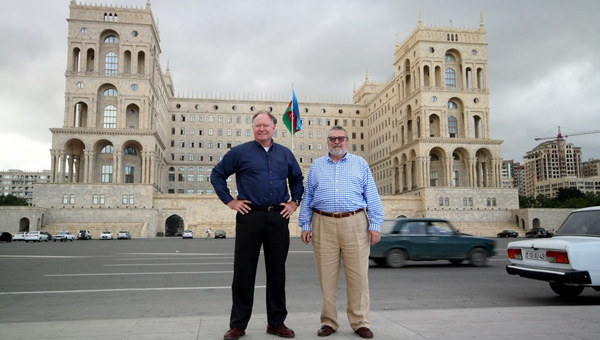 Dr. Ed Merkel, right, recently spoke at the Third International Congress in Azerbijan. He said participating in the economic summit gave him a unique insight into the country.

When Dr. Edward Merkel was invited to speak at the Third International Congress, “Caucasus and Central Asia in the Globalization Process” at Qafqaz University in Baku, Azerbaijan, he was honored and very excited to be a part of a conference that would focus on the economy and international relations.

Merkel is professor of economics and director of graduate business programs at Troy University.

He was among speakers from different regional institutions who would evaluate conditions and provide discussion covering the shared problems and contribute to generating joint policies.

Scott Bailey, associate dean for the global campus, accompanied Merkel to the conference Oct. 15-17 in Baku, which is the capital, the largest city, and the largest port of Azerbaijan and the entire Caucasus.

Azerbaijan has begun a series of programs under which young people have the opportunity to continue their education abroad thanks to government grants.

By so doing, these educated young professionals will be able to provide invaluable contributions to the development of a knowledge-based society in Azerbaijan.

“This would be a great opportunity for our students,” Merkel said. “And, from my experience, it is a place that, once you visit, you will want to go back. Tourists have not yet discovered Azerbaijan. When they do, people will flock there.”

Merkel said the opportunity to speak at such an important conference was a rare, and it was also a learning experience for him to hear the many other speakers and to share ideas will economists from other areas of the world.

“We were only there three days and most of our time was scheduled but we did have some time to walk around the city,” he said. “I was really surprised at Baku. It was as modern as any of our cities and absolutely safe and it was spotless. There was not any trash anywhere. And, it’s on the Caspian Sea and it’s just beautiful there.

Azerbaijan plays the role of a bridge between different parts of the world, cultures and religions. The historic Silk Road passed through Azerbaijan.

“The country is Muslim but liberal and we were treated with such hospitality that it was almost embarrassing,” Merkel said. “There was no animosity toward Americans.”

And, the food was good.

“We were served lamb soup with yogurt as its base,” Merkel said. “All of the food was interesting and good.”

In Baku, the old and the new shared common ground.

“Next to a mosque would be an ultra-modern building,” he said. “It was all very interesting.”

Oil revenue has money literally flowing into the country. The oil industry is owned and controlled by the government and there is no poverty.

“The government has used its oil money wisely,” Merkel said. “They have used it primarily on the infrastructure. There are about 8.5 million people in Azerbaijan and most of the businesses are small shops, not corporations.”

Merkel didn’t get to visit the countryside but, if it compares in any way to the beauty of the cities, then it must be pristine, he said.

For Merkel, visiting Azerbaijan was the beginning of a fascination for a country that many people don’t even know exists, but he said that it’s a treasure just waiting to be discovered.