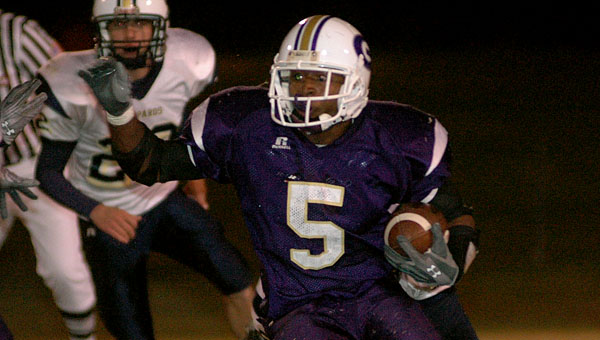 The Goshen Eagles opened up their 2010 playoff run with expectation of a state championship.

That run was stopped before it could ever get started.

“We had 12 unbelievable seniors on this year’s team that gave it their all the whole season. They were a super group and they did a great job of leading us the whole season. I wish it could still be going for them.

“I did some things that were not a part of our routine and it messed us up, especially in the beginning of the game. In the end, Mobile Christian did a good job of executing, the whole game, and we did not.”

The loss was just the second of the season for the Eagles, as the team finished with a 9-2 overall record.

Right from the opening kickoff, the Leopards controlled the game. In the opening drive, Mobile Christian marched down the field to the tune of 71 yards in 2:52 minutes to take an early 6-0 lead.

After the Eagles’ offense stalled thanks to a blotched snap that traveled 19 yards in the wrong direction, the Leopards got the ball again with the end result the same – a Leopard touchdown. On a fourth and four, the Eagles were flagged on a pass interference call, to give Mobile Christian a first and goal, which it would take advantage of on the next play to go up 14-0.

On Goshen’s possession, the Eagles got the ball inside the Leopard red zone, hoping to chip away at the lead, but the opposite would take place.

A Jerome Lawrence pass that went off the finger tips of Brandon Alford found its way into the hands of a Mobile Christian defender, and he proceeded to take the ball 83 yards to the back of the end zone, to give the visiting team a 21-0 lead in the first quarter.

The only bright spot for the Eagles in the first half came on the ensuing possession, when running back Reginald Foster found some daylight and rushed for a 45-yard touchdown, cutting the lead to 21-6.

The Leopards then find the end zone one more time in the second quarter, to go up 27-6 as both teams entered the half.

By that point the damage was already done for the Eagles.

After Goshen again failed to reach pay dirt on its opening drive of the second quarter, the home team got some luck when Mobile Christian fumbled and Eagle defender Jonathan Thomas recovered.

This time, the Eagles would not be denied, as again, Foster put points on the board thanks to a one-yard run to cut the lead to 27-14.

Mobile Christian would answer right back with 15-unanswered points to take a 42-14 lead.

That would not last long though as a pair of Lawrence rushing touchdowns cut the lead to 42-26, but it was a little too late, as the Leopards would add another score before the final buzzer sounded to pull off the upset.

“I knew we were going up against a great team in Goshen,” Mobile Christian head coach Tom Wasden said after the game.

“I thought we had a pretty good game plan set that would maybe help us out (Friday night). We were able to get a good performance out of our guys against a very good team.”

It was a little over a decade ago that Wasden was patrolling the sidelines in Goshen as the head coach, with Snyder as one of his assistants.

“This was a bittersweet win for me,” he said. “I was looking forward to this game but at the same time, I was pretty sick about it. I have known Bart for a long time and it’s never fun to beat a friend.”

“This is really hard to take in,” a teary-eyed Jackson said in between hugs from fans, coaches and players.

“This is the last time I am going to put this jersey on. I don’t want to take it off. This team has meant everything to me.”

In his final game in purple and gold, Jackson finished with 108 yards on 17 carries.

In all, the Eagle offense had just 272 total yards.

“Mobile Christian is a very good team, and they showed it (Friday night),” Snyder said.

“There were a lot of things that we didn’t do right, and they did. But ifs are half a life. That’s football, that’s why you play the game – anything can happen.”

While the coach said he was disappointed the season ended the way it did, he still believes his team will be right back at it in the new season.

“We are still growing.

“Last year was a step in the right direction and so was this year. You can’t get to the top over night, these things take time. We will be back next season ready to go.”