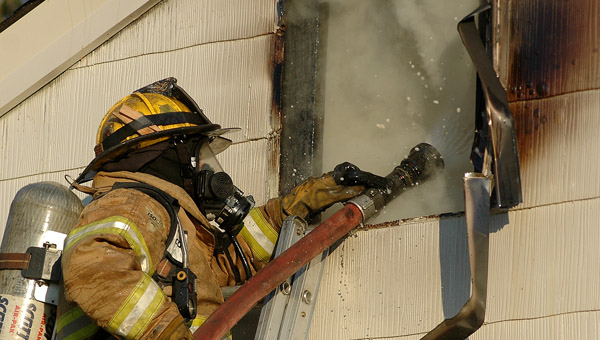 A firefighter houses down flames within the attic at the scene of a house fire on Henderson Highway, just outside of Troy, Ala., on Friday, Nov. 5, 2010.(Messenger Staff Photo/Thomas Graning)

Three fire departments converged to put out a house fire Friday at the intersection of Henderson Highway and Little Oak Road, according to information from the Troy Fire Department.

Troy Police responded to a 911 call at 4:43 p.m., according to information from Police Chief Anthony Everage.

Troy, Goshen and Henderson Fire Departments all arrived on the scene. Engine 5 of the Troy Fire Department arrived at 5:01 p.m., and the last truck left the scene at 6:04 p.m.

The owner, Chris Blair, said he was just down the road when the fire broke out. No one was inside the home, and no one was injured.

The owner’s father, Curtis Blair, said the fire may have started from a wood-burning stove. Shaver said the fire was first contained around the stove area, but then climbed through the walls and into the attic.

“The entire attic area was scorched,” he said.

The firefighters left the house and slid headfirst through an attic window, where they put out the fire that had scaled the walls. Shaver said the fire damaged mainly one room and about 20 percent of the home, not including the damage in the attic.

The house was on the fringe of each of the three fire departments’ jurisdictions, Shaver said, so when the call was made, they all responded. Their presence was welcome, however—the area had no hydrants, so the fire needed the extra water, he said.

All of the departments participated in extinguishing the fire quickly, Shaver said.