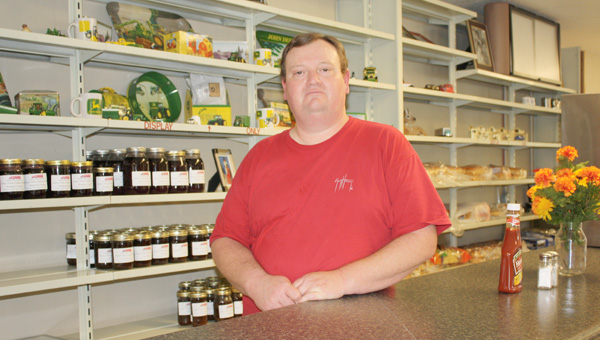 Randall Hattaway behind the bar of the café where customers sit at the stools and enjoy Mrs. Faye Hattaway’s home made southern cooking. (Photo/Rachel Ward)

After nearly two decades, the small town of Hamilton Crossroads has welcomed back old memories, new faces and the traditional southern cooking that turned a 1950s truck stop into a beloved local hangout.

Hattaways Truck Stop LLC, which first opened in 1956, reopened in the beginning of October.

Originally started by Eugene Hattaway, Hattaways Truck Stop was the first Standard Oil truck stop in the state, along with the best southern cooking around, in the café.

The establishment became a family tradition when the owner’s son, Douglas Hattaway, met a young lady named Faye while he was cooking at his dad’s cafe. The rest is Hattaways history, and their son Randall now owns the truck stop.

“I grew up in the store. There was a home in the back of the truck stop,” said Randall Hattaway. All the family members lived there, because it was home, Hattaway explained.

In 1990 the truck stop closed due to the changing of the times.

“All of us hated it closing, especially my grandfather. He wanted to keep working,” Hattaway said.

At the time of the closing, Randall was in his twenties yearning to keep the business going. He kept re-opening the truck stop as a dream he would work towards – a dream that would eventually come true.

After 18 months and half a million dollars in renovations, the truck stop was completed and ready for business.

The building was covered in kudzu, so they had to take out a bunch of walls and change out the eye beam that held up the ceiling, Hattaway explained.

“I’m in disbelief, even every day working with it, to see this business I grew up with here again,” Hattaway said.

When the truck stop originally opened, Hattaway’s was the place to be. Customers who have come in since the opening reminisce about these memories and their younger years, Hattaway said.

“A lot come here, their parents would let them come here when they were younger because this was a clean establishment. They walk in and sit nowhere but the stools and reminisce about the old days,” Hattaway said.

Since opening, business has been steady and gradually gets better, Hattaway said.

The truck stop is fully furnished with a café that serves breakfast, lunch and dinner, all which is made from scratch.

“Mostly two meats, four vegetable choices, and on Saturday’s the original barbeque plate with the same recipe my grandfather used in 1956 is offered,” Hattaway said.

Hattaway tries to keep prices as low as possible without affecting the quality of the food. For example, his Homemade Hamburger is $2.95 and the barbecue plate is $7.50 including all sides.

“This is country cooking, and we try to keep it as old-time as we can,” said Faye Hattaway, cook and mother of Randall Hattaway.

When you walk into Hattaways you’re taking a step back in time, where the quality of food matters, southern hospitality is shown through the service and the customer is always right, Hattaway said.

Buisness hours for Hattaways Truck Stop are 6 a.m. to 6 p.m. Monday through Thursday and 6 a.m. to 8 p.m. Friday and Saturday.

When the holiday shopping season rolls around — and it will, sooner than you think — you could brave the... read more