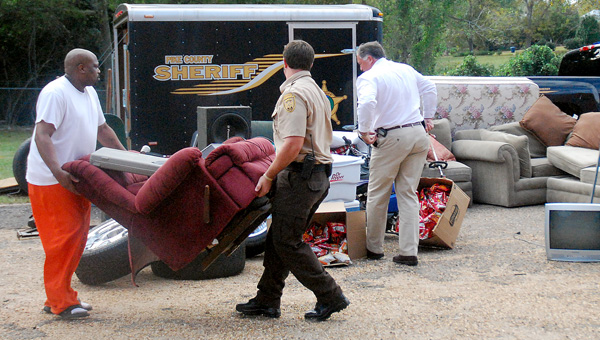 The Pike County Sheriff’s Office has recovered thousands of dollars in goods stolen by two teens in a used pickup, according to information from Sheriff Russell Thomas.

Patrick Hussey, 18, has been charged with one count of theft and eight counts of burglary in a spree that stretches back to September. A 17-year-old is also being charged in the case, Thomas said.

“We’ve been working on this for weeks,” he said.

On September 20, the burglars broke into a home through a window at 2044 County Road 6600 and took a Kenmore washer and dryer, a refrigerator, a 37-inch TV, two pellet guns and a microwave. The washing machine was sold for $300, and police are in the process of recovering it and the fridge, Thomas said.

During the same month, on Sept. 30, they took a blue and white Yamaha R-110 Motorcycle valued at $2,000 from 4724 County Road 6600. The two had their pickup parked on the road, Thomas said. One of them pushed the motorcycle from the house to the truck.

They then took the motorcycle to their home at 1738 County Road 5508 in Troy, Thomas said.

On Oct. 17, they broke into the Goshen High football concession stand to steal four coolers, five cases of Gatorade, 20 cases of Pepsi, Mountain Dew and Dr. Pepper, and assorted candy.

Written on the recovered coolers was Coach Mark Snider’s name, Thomas said. Hussey confessed to using a pair of bolt cutters — which were also recovered — to break into the stand, Thomas said.

The next day, the two hit the Banks Middle School stand and took about 200 bags of chips. Some of the items from both the stands were recovered, Thomas said.

On the day after that, Oct. 19, the two pried open the door at 336 AL Highway 223 and stole a couch and loveseat, a leather recliner, two mattresses, turkey calls, a hunting bow and cleaning supplies, all valued at $3850. Most of the items were recovered, Thomas said.

On Oct. 29, they broke into a home at 2183 County Road 6600, in the Linwood community, by removing the air conditioning unit, Thomas said.

From this burglary, the recovered items totaled $4,950, Thomas said.

From the Skin Oak Hunting Club, on an unknown date, the two also took two recliners, a loveseat and a fridge, some of which were recovered, Thomas said.

The burglaries also spread into Brundidge and Troy City limits, Thomas said. Stolen from Ramage Field in Brundidge were several aluminum bats, balls, a controller for a scoreboard and P.A. system speakers.

“That was taken out of our press box here in Brundidge,” Brundidge Police Chief Moses Davenport said.

Pike County Police are working with the Brundidge Police Department on this portion of the recovered items. Davenport praised the teamwork between the departments.

Within the city of Troy, two weed-eaters and several gas cans were stolen, recovered and taken to the sheriff’s department. Troy Police Department is also on the case, Thomas said.

“This investigation is ongoing, but we’ll continue to investigate these cases along with Troy City Police and the Brundidge Police Department,” Thomas said.

Commissioners: No funding for jail project

County Commissioners may be in the “baby stages” of planning a new facility for the Pike County Jail, but without... read more