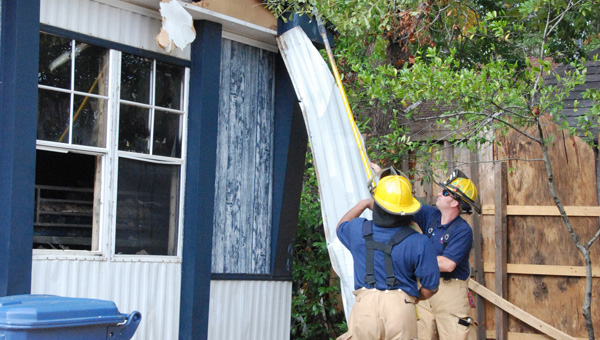 Firefighters work to remove roofing and siding from a mobile home on Tojan Way that was damaged by a fire Thursday morning. The interior of the structure was severely damaged, but no one was injured, officials said. (Photo/Wendy Ward)

A fire charred and melted the inside of a mobile home on Trojan Way Thursday morning. No one was harmed, and the tenant was away from home at the time.

The fire started near the bathroom and spread to the hallway, Troy Fire Captain Buddy Fowee said.

The back bedroom suffered little fire damage, but the ceiling was destroyed and insulation littered the bedroom and hallway. Several computers in the bedroom melted from the heat, Fowee said.

The fire itself was confined to those two areas, but the smoke and heat damage covered the entire home.

Thick soot marked with firefighter footprints coated the kitchen floor. Every surface, including the mirrors, windows and a statue of Jesus, was blackened in the smoke. The tenant had two live decorative trees inside, which also melted rather than burned.

The thermostat, window blinds and light switch covers also melted, and the slats of the ceiling fan melted until they drooped from the fixture.

The fire department answered the call at 9:51 a.m., and the tenant reported leaving his home between 7:30 a.m. and 8:00 a.m., Fowee said. When the firefighters extinguished the flames, the steam generated throughout the home raised the temperature and blew out several windows, Fowee said.

“[The steam] helps us fight it, but it gets a lot hotter,” he said.

The mobile home itself was insured, and no foul play is suspected.