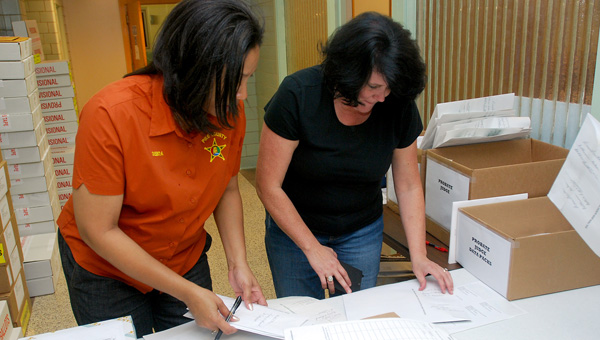 Nearly 56 percent of the registered voters came to the polls, casting ballots for more than two dozen offices on a statewide and local level.

“It was a good day,” Allen said. “I want to thank the poll workers and all the election officials for their help.”

He added his thanks to the Board of Registrars, and said that the provisional votes would be canvassed in about a week, explaining that all results released Tuesday were unofficial until the results are certified.

Although the 2nd Congressional District race was too close to call at presstime, voters in Pike County cast their ballots in favor of Democratic incumbent Bobby Bright over GOP challenger Martha Roby, 5,097 to 4,517. And even though state Sen. Wendell Mitchell, D-Luverne, lost his district to GOP challenger Bryan Taylor by a sizeable margin, the difference was less than 1 percent in Pike County, where Taylor earned 50.06 percent of the votes and Mitchell, 49.87 percent.

Joel Lee Williams, the hometown candidate for 12th Judicial District Circuit Court Judge, carried Pike County, 51.21 percent to Republican Shannon Clark’s 48.77 percent. It was not enough, however, for him to win the seat, as Clark carried Enterprise.

Like the remainder of the state, Pike County defeated all four amendments on the ballot.

For more detail on the Pike County results, see www.troymessenger.com