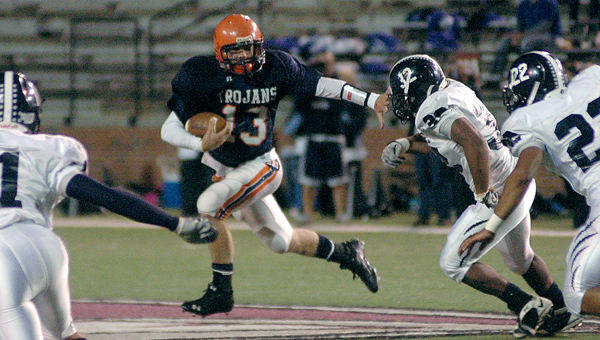 A trio of overtimes, 81-points and one play told the story at Veterans Memorial Stadium on Friday night in Troy. Senior Trojans linebacker Louis Schrieber shot the gap with his eyes on Enterprise quarterback Rhett Harrelson. Schrieber made the tackle in the backfield on a Wildcats two-point conversion to secure the win in the third overtime of the game, 41-40.

“It’s senior night, and there’s no way we were leaving here with a loss,” Schrieber said. “I knew they wouldn’t run the ball my way, but I had to get into the backfield and make a play. I knew I had to stop him. It was win or lose.”

Mayhem ensued on the Trojans sideline as a sea of orange and blue jerseys rushed the field in ecstatic celebration after Schrieber and Harrelson hit the turf near the five-yard line.

“What a game,” Trojans head coach Hugh Fountain said. “What a game. What a game. These guys deserve that victory. They have been in so many close games this season. They wouldn’t be denied tonight. We have a fighting team. That’s the characteristic of this team. They are all fighters, and I couldn’t be more proud of them.”

The Trojans (6-4) and the Wildcats (4-6) ironically played a lackluster first half ruled by defensive play as the Trojans clung to a 6-0 lead. The lone touchdown from the first two quarters of play came on a 13-yard touchdown run from quarterback Corey Dennis with 11:54 left in the half.

What seemed to be a slow night on the gridiron would soon change.

Enterprise manhandled the Trojans into the final seven minutes of the game scoring three unanswered touchdowns and leading 20-6. The fighting Trojans however had different plans for the outcome as they managed yet another fourth-quarter comeback this season.

Dennis hit the end zone again with 6:56 left to play, and the Wildcats fumbled their next possession back to the Trojans. The Trojans marched again towards the end zone, and Dennis hit senior wide receiver Jeffery Barker for a 17-yard touchdown pass leaving 22 seconds left in the game.

Enterprise kneeled the clock away, and overtime followed.

The Wildcats scored with ease on a 15-yard touchdown strike from Harrelson to a wide-open Wildcat. The Trojans responded in one play with a touchdown run from Quintus Moss to tie the game at 27 each.

“Our offensive line stepped up big in overtime,” Dennis said. “They were huge when it counted the most, and they played big for us in overtime.”

The offensive line, and the game’s scoring had only just begun.

The second overtime started with the Trojans scoring on a 10-yard pass from Dennis to Tehron Stallworth to put the Trojans up 34-27. Enterprise responded with a one-yard touchdown run on the second play of the possession.

The Wildcats decided to win or go home though after the third score of extra play as it looked like both teams were beginning to become unstoppable.

Quarterback sweep was the play call, and Schrieber made a play he will never forget.

“This game does a lot for us,” Dennis said. “We’re motivated, and I think these guys could stay out here and play all night long.”

Dennis finished the night completing seven passes for 67-yards and two touchdowns pushing him over the 1,000-yard mark as a passer. He also rushed for 85-yards and three touchdowns on the night, and became the first Trojan in school history to rush and pass for 1,000 yards in each category.

Moss totaled with 137 yards on the night and a touchdown.

“This was a big win for our team tonight,” Fountain said. “This team really deserved it too.”