Roby, others speak at GOP luncheon 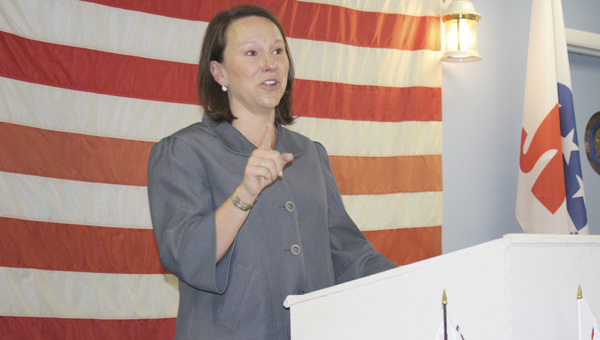 Congressional candidate Martha Roby was among the speakers at the Republican Women's luncheon Wednesday in Troy. Roby vowed to put on her "four-inch heels" and campaign heavily in the final days before the Nov. 2 general election.

In the wake of her recent debate with Congressman Bobby Bright, Roby explained how good it felt to set the record straight and how she could feel her support in spirit last week as she debated her opponent.

“We have a congressman that can’t make up what he believes and people see through this,” Roby said.

Roby explained Bright has told the public we don’t need a fighter in Washington.

In response she said, “Oh yes we do, and I’m going to fight for you every day.”

She added that she and her supporters can’t give up now, at that every ounce of energy she has will be used until election day.

In response to questions raised regarding her support of reducing teachers’ funds, Roby said teacher education is a priority, but not at the teachers’ expense.

“Teachers and parents are in a much better position to make decision for their children than a faceless politician,” Roby said.

Roby also gave her stance on political corruption, saying a good place to start in federal programs is to root out waste and fraud.

“We need leaders in Congress that will hold accountable to every dime of our tax payers money,” she said.

Roby said she is in good spirits about the election and continues to stay motivated during the last six days of her campaign. In the next four days, Roby will travel 1600 miles with 30 public appearances to reach out to voters. Monday she will be present at the Troy GOP headquarters located on the 231 highway from 9-9:30 a.m. with Senator Sessions.

“This is a marathon, not a sprint, and I’ll have my four-inch heels on sprinting to the finish line November 2nd,” Roby said.

“He’s smart, he’s spent four years with major issues. I’m confident he wont need a lobbyist, he can understand things himself, and I also believe this is why his opponent won’t debate him,” Taylor said.

Taylor added that her husband has lived by a certain code of honor his entire life and is a hard worker but also a family man.

“This is an important race, every vote counts, and if you vote for him, 136 years democratic control in legislature can end,” Taylor said.

Brittany Mitchell stepped in to represent Dr. Robert Bentley, and immediately stressed the importance of this election.

“If we sit at home and don’t vote, Ron Sparks will be our next governor and this state will be filled with corruption and greed,” Mitchell said.

“We need republicans across the vote, we need the right man, and we need to vote a straight republican ticket November 2nd,” Mitchell said.

In Circuit Judge candidate Shannon Clark’s opinion the difference between a democrat and a republican is enthusiasm. To that end, in the six days left in her campaign, Clark said she wants to meet as many people as possible and created an informed decision for voters.

“I’m honored to be a Republican candidate. I want to hold true to values we share of fairness [and] impartiality in a courtroom,” she said.