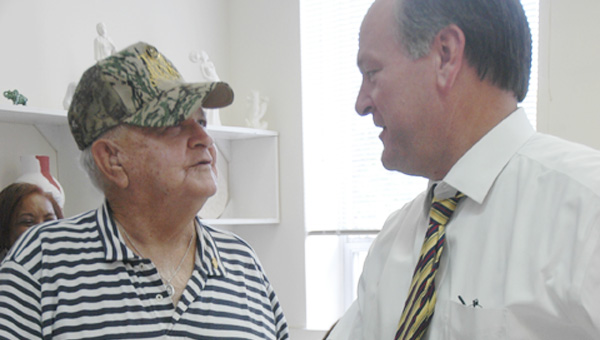 Congressman Bobby Bright visited with constituents at the Colley Senior Complex on Thursday during an impromptu campaign visit to Troy and PIke County.

Bright, D-Ala., is making a last tour of his district before the Nov. 2 election.

Bright arrived at the center at 2 p.m. for a tour of the complex and a chance to meet Troy’s 50-plus set. While he didn’t give a formal speech or make any announcements on a large scale, he shook hands and saw how active the center’s members are.

On his tour, Bright passed through a pottery room, where people fashioned everything from bowls to ceramic castles.

In another room, he caught up with Mayor Jimmy Lunsford, Motes and Betty Minton, a senior who painted ceramic Christmas trees and gave Bright an angel ornament.

“I’ll put this up in my window in Washington, D.C.,” Bright said.

“You need a guardian angel up there,” Lunsford said.

Downstairs, Lunsford and Bright challenged each other and two seniors to a game of bowling on the center’s Wii. It was the first time Bright had ever played on a Wii, he said.

Bright also attended a church luncheon with Bishop W.C. Scott, his brother Jimmy Scott, and about 25 members of the community. During his visit to Troy, Bright said he was amazed at the amount of people who didn’t want to ask him questions, but instead offered him their support.

“I would say 90 percent of the people at both of those locations were reinforcing their support for me,” he said.

“They give you a good barometer and a good reading of how the community feels,” he said.

He added that he believes he will see Troy’s support in the election Tuesday.

Motes, the director at the center, said she hopes the voices of the people she works with every day are heard and appreciated, in and out of election season.

“For my seniors, I hope that by him coming here, it makes them realize someone cares what they think,” she said. “It’s important for them to feel that their contributions aren’t going unnoticed.”

At the center, seniors participate in 125 classes that teach crafts, aerobics, quilting, video games, computers, dancing and choir, just to name a few.

“I know that these seniors do make a difference, not just to me but to society,” she said. “I want them to have everything they deserve. I hope it is not all talk – I hope there’s action behind it.”

Minton, the woman who gave Bright the angel ornament, knows the needs of senior citizens, including the burden of paying for expensive medicine on a social-security income. She said she hopes the angel will remind Bright of his responsibility to her and other seniors.

“That’s why I gave him that ornament,” she said with a smile. “Every time he looks at it, he’ll think of the seniors.”

In a later interview, Bright gave his support for maintaining a strong social security and preventing the privatization of social security, so that “Wall Street thugs” don’t get involved, he said. He added that he will “remember [Minton’s] face forever.”

“They’re my boss,” he said of his constituents. “They tell me what to do.”

Roby, others speak at GOP luncheon

Congressional candidate Martha Roby was among the speakers at the Republican Women's luncheon Wednesday in Troy. Roby vowed to put... read more