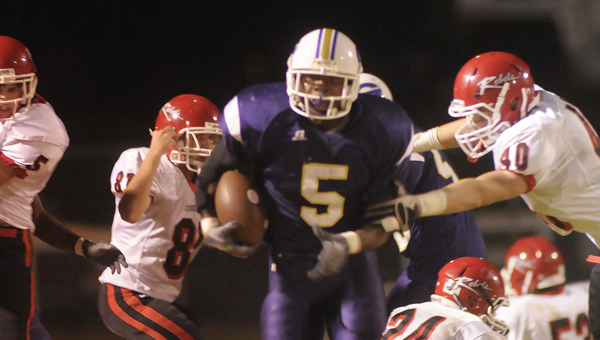 It took the Goshen Eagles a few minutes to get warmed up in Friday night’s 54-14 win against Zion Chapel in the Eagles Nest.

About six-and-a-half minutes, to be exact.

That’s about the time senior running back Marcus Jackson got his hands on the ball for the third time on the Eagles’ second possession of the game and took it 23 yards for the touchdown – after having post 27 yards rushing on his first two carries.

Those 50 yards wouldn’t be his last on the ground either. Jackson carried 12 times for 281 yards in about two-and-half quarters of play. On defense, Jackson was credited for one tackle and three assists.

To most in the stands, the night was a nearly perfect linkage of offensive scoring and solid defense that held the Rebels to just 224 yards on the ground, 27 yards in the air and forced three interceptions.

“Regardless of what the scoreboard read at the end of the game, Zion Chapel is a tough team that never gave up all night long,” said Eagle head coach Bart Snyder. “Wesley Black is a great player and we knew it would take us a while to get going against this team. They hit hard all night long.”

Snyder said the turning point for the Eagle offense was being able to make adjustments in the offensive line to compensate for the size of the Rebel line. Once made, those adjustments allowed the Eagle offense to amass 366 yards of rushing, and quarterback Jerome Lawrence to go 6-for-4 for 111 yards and one touchdown to Brandon Alford on a 53-yard pass midway through the second quarter for the Eagles’ second TD of the night.

It was on the Rebels very next possession when John Bean was ejected from the game along with Rebel running back Zachary Lee after a minor scuffle at the bottom of the stack.

“We had a costly mistake and it resulted in losing Bean for the game,” said Snyder, who burnt an Eagle time out to discuss the call with the officials.

With 1:26 left in the half and the Eagles on the Rebel 9 yard line, a series of penalties would back the Eagles all the way to the Rebel 35 before senior Reginald Foster carried for 35 yards and the touchdown. Lawrence got the two-point conversion on the quarterback keeper and the Eagles headed to the lockers 20-0.

Less than two minutes into the second half, Jackson scored on a 50-yard run, and again on an 83-yard carry with two minutes left in the third quarter to put the Eagles ahead 33-0.

The Goshen defense rose to the challenge on the Rebels next possession when Alford’s interception and TD run was called back. With just over a minute, Deion Merritt found pay dirt to put the Eagles up 40-0.

Both Rebel scores didn’t come until the fourth quarter when Black found the end zone midway through, and a score with just 40 seconds left in the game.

The Eagles wouldn’t take that one easily. Deion Merritt ran the kickoff back with 26.1 seconds left in regulation to end the game.

“Coach Waters had this team ready for us, and they played hard to the end. That’s what we needed – we needed to play four quarters of hard-hitting football and that’s exactly what Zion Chapel delivered tonight,” Snyder said.