Trojans fall to Tigers on the road 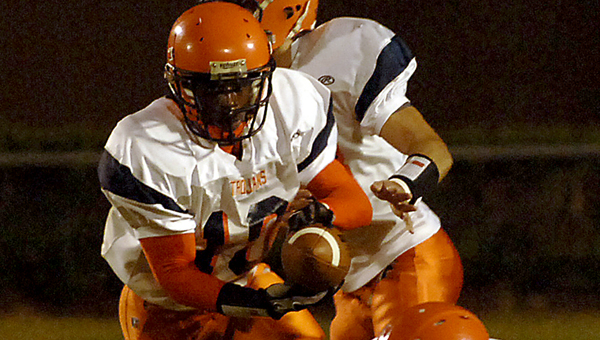 But the Tigers weren’t content with just winning a region crown. They finished a season sweep of the region by defeating Charles Henderson 43-21 Friday at Tiger Stadium.

The win didn’t come easily, though. The visiting Trojans led 21-20 to start the fourth quarter and nearly put a damper on the Tigers’ Senior Night game.

“(Charles Henderson) came over here and really didn’t have a lot to play for since they earned a playoff berth last week. But they played with great effort,” EHS coach Dan Klages said. “We knew that they were looking forward to this game more than any other game they played this year.”

Eufaula (7-2, 7-0) led 20-7 late in the first half, but let the lead slip away by the beginning of the third quarter. Jeffrey Barker’s 2-yard touchdown run early in the period knotted the game at 20-20. Hyrum Salmon then booted the extra point kick to give the Trojans their first lead.

Eufaula struggled offensively in the third quarter, and it appeared Charles Henderson (5-4, 4-3) would add to its slim margin late in the period after driving inside the 20-yard-line. But the Tigers forced a pair of incompletions on third and fourth downs to thwart the drive.

The defensive stand seemingly sparked the Eufaula offense. On the second play of the fourth quarter, Tiger junior Maurice Crews scored the go-ahead touchdown after he took the inside handoff and went 67 yards on a highlight-reel run that included several broken tackles.

It didn’t get any better for the Trojans after that. On their next offensive play, Cory Dennis’ short pass was tipped by linebacker Ramon Lewis and intercepted by nose guard. The 5-11, 277 lb. senior rumbled 30 yards to the Trojans’ 4, and nearly missed scoring a touchdown. But Eufaula quarterback Demonte Jett did score two plays later on a 4-yard run to give the Tigers a two-touchdown cushion.

Crews put a dagger in the Trojans’ upset hopes later in the quarter when he scored on a 48-yard touchdown run.

Both teams scored quickly to open the game. Crews went in on a 39-yard run to cap a three-play, 58-yard drive. Dennis countered with a 29-yard quarterback keeper to his right.

Jett scored on a 1-yard run to start the second quarter, and Mike Mayo added a 3-yard run with 2:56 remaining in the quarter to give the Tigers a 20-7 lead. But the Trojans answered by successfully executing their hurry-up offense and scoring with 55 seconds remaining in the period. Quintus Moss scored from 16 yards out on fourth and one. The halftime score was 20-14.

Barker put a scare in the Tigers with his touchdown run to start the third quarter. But the Eufaula defense was then able to stop the Trojans, which had scored their three touchdowns on drives of less than two minutes.

Crews finished the game with 168 rushing yards on just nine carries. Eufaula rushed for 379 yards on 38 carries, averaging nearly a first down each carry.

Klages said the game was won up front. He also praised the defensive line’s pressure which led to several Charles Henderson holding penalties.

“I felt like that’s where the game would be won,” he said.

Panthers too much for Bulldogs