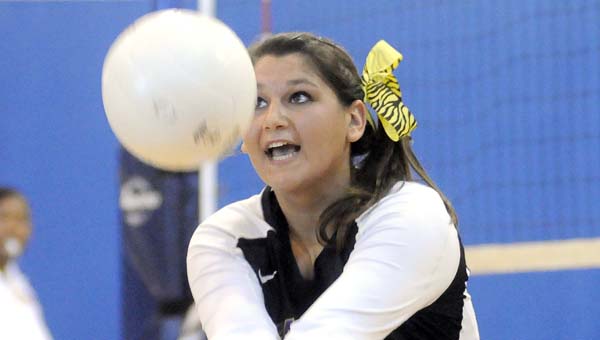 Goshen High School's Devon Izzio returns the ball during one of the Eagles' games on Saturday. (Messenger Staff Photo/Thomas Graning)

As the round of 16 begins today, the Goshen Eagles volleyball team finds itself in a unique position.

The team is opening up its first ever-state match against a team that won the championship just two years ago in Providence Christian.

But even though it may look like a ‘David versus Goliath’ type match up, GHS Dee Hughes said her girls are ready for the challenge.

“We have had a really great week of practice,” the coach said. “We have thrown a lot at the girls and they have all responded they way we had hoped.

After getting the fourth seed in this past weekend’s region tournament, the Eagles secured their trip to Dothan to face off against another group of Eagles in Providence Christian.

PCHS finished with a 33-9 overall record, including eight-game winning streak that it will take into the state match.

The Eagles also finished ranked No. 2 in the Class 2A ASWA poll to end the regular season.

But GHS had a streak of its own during its season, as the Eagles from Goshen reeled off 10-straight wins to finish 11-2 in the regular season. While the regional tournament may not have played out the way Hughes or her team had hoped, the coach said her team learned a lot from the final two matches, both of which were losses.

“We have been practicing a lot on some of the adjustments we made during the final two games, and especially on the things that Zion Chapel was doing to us.”

But while the team has been working on the physical side of the sport, Hughes said she has talked to the girls about the mental side as well.

“Volleyball is one of those sports where things can change so quickly, you can be winning the whole time and a team can go on a late run and then you find yourself with a lose. Our girls know that. There is going to be an intimidation factoring going up against a team like Providence Christian, but we have told the girls to just play the rally and not to look back at anything or look ahead. The last thing we want to do is take ourselves out of the game mentally.”