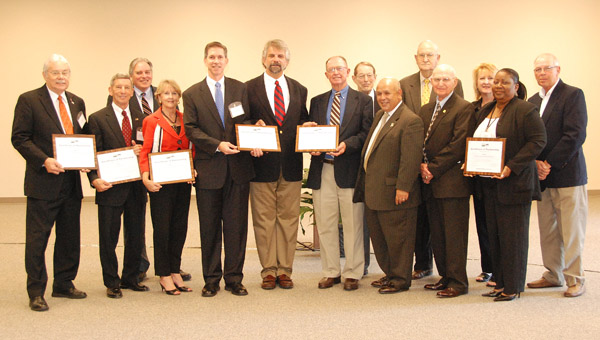 Two grants from the United States Department of Agriculture will help build new dreams and preserve old culture in the area.

USDA Rural Development Deputy Undersecretary Victor Vasquez traveled from Washington, D.C., to Pike County on Tuesday to present a $123,600 grant to the Tupper Lightfoot Memorial Library in Brundidge and an $82,000 grant to the Organized Community Action Program, a non-profit organization that provides adequate housing for very low-income families. The grant will help renovate homes for 12 families in Crenshaw County. Vasquez presented the grants with Ronald W. Davis, the State Director of USDA Rural Development in Alabama.

The two officials went to the library at 10 a.m. and then traveled to the CGI Center for Excellence in Troy at 11 a.m.

In Brundidge, the Tupper Lightfoot Memorial Library has been a part of the community for more than a century. Across a rough wood walkway, a team of contractors has built a new wing for the library, complete with a wheelchair ramp and front porch.

And it seems God is in the details — from the whitewash paneling and iron handrails to the edging on the roof of the new wing, the craftsman cut no corners in replicating the historic style of the library.

Inside, the carpet is spotless and the empty rooms are ready for computers, a big screen TV, books and families. The grant will help furnish the new wing.

About 20 people, including library board members, Mayor Jimmy Ramage and other local officials attended the grant reception.

After Mayor Ramage provided an introduction, State Director Davis introduced the deputy undersecretary and said a few words about the power of community service and the legacy of the library in Brundidge. 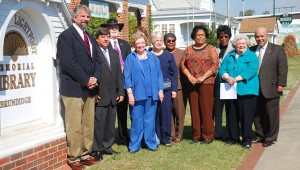 “A library is no longer a place to just come and read a book,” he said. “It’s a cornerstone of our community.”

In his brief speech, Undersecretary Vasquez praised Brundidge’s community involvement in the preservation and upkeep of the library.

“None of this would have occurred without the community coming in and saying ‘This is what we want,” with everybody pitching in,” he said.

He added that the grant will help support the community and create growth.

“To me, that’s an investment in the future,” he said.

After Davis and Vasquez presented the grant and a plaque to librarian Jean Carroll, the group filed outside to admire the new building.

“They truly did a nice job,” Vasquez said. He also said the funding of the library, and other libraries across America’s rural cities, will provide the groundwork for cultural growth, economic growth, jobs and community pride.

“The foundation of all of that will always be education,” he said.

Fifteen minutes later, the group of officials had driven from Brundidge to CGI, where they met Mayor Jimmy Lunsford, representatives from South Alabama Electric Cooperative, Director Wanda Moultry from the Organized Community Action Program, and about 60 others.

Wanda Moultry accepted the $82,000 grant for OCAP, and said the funds would go to the renovation of homes in Crenshaw County, including floor repairs, kitchen remodeling, doors, windows, roofs, and more. Whatever a home needs to be up to code, Moultry said.

“It gives us a larger scope to help very low income families in our area,” she said.

The reception took place in an empty wing of the center, where CGI is planning to spread into its second phase of hiring and expansion.

“We’ve run out of space in Phase I,” CGI Operations Director George Tarbox said. “And that’s a wonderful problem to have.”

In March, Troy City Council members approved an $850,000 zero-interest loan from the USDA, which was provided through the South Alabama Electric Cooperative. The loan paid for incentives for CGI to develop in Troy, and left the city with a yearly $85,000 tab for 10 years, instead of $850,000 up front.

Mayor Lunsford said the CGI move, and the jobs that have come with it, would not have been possible without the loan and corporate partnerships in Troy.

“It’s obvious, with well over 100 new jobs, with the anticipation of hundreds more, this project is going to have an amazing effect on our city,” he said. “You win with teamwork.”

Nearly 300 residents joined in the annual "Walk for Jesus" in Brundidge this weekend. The goal was to unite the... read more