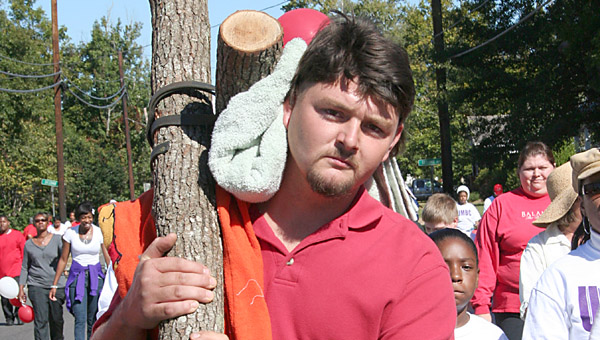 Nearly 300 residents joined in the annual "Walk for Jesus" in Brundidge this weekend. The goal was to unite the community in common prayer. (Photo/Jaine Treadwell)

Nearly 300 people participated in the annual “Walk for Jesus” in Brundidge on Saturday.

The walk was sponsored by the Concerned Christians of Brundidge in an effort to take Jesus outside the four walls of the churches and into the streets.

“This was by far the largest number of walkers for Jesus that we’ve had in the 11 years of the march,” said CCOB President Willie Moultry, co-pastor of New Hope Holy Church of God in Brundidge.

The “Walk for Jesus” started at Galloway Park Saturday morning and convened at Pike County High School for a prayer and praise service.

“Not everybody is the same so we wanted to make sure that we included everyone,” Moultry said. “We had a variety of prayers – Methodist, Baptist, Pentecostal, A.M.E. and Jews. Pastor Thomas Shipman of Whitewater Missionary Baptist Church delivered a powerful message and one that even children could understand. The music was by a mass choir and the music was inspirational. It was a wonderful worship service.”

Following the service at PCHS, everyone was invited to fellowship together at Galloway Park where lunch was available and games were planned for the children.

“It was a great time of togetherness for our community,” Moultry said. “And, it all started 11 years ago when a group of concerned citizens got together to try to get Galloway Park reopened.”

Moultry said the park had been closed after a shooting incident.

“We had that trouble and the park was closed for about 10 years,” he said. “Some of us went to the Mayor (Jimmy) Ramage and asked him what we needed to do to get the park reopened. He said we needed to start by getting it cleaned up.”

The group of concerned citizens began picking up the paper and trash.

“When the mayor saw we were serious about reopening the park, the city got busy and made the park look real nice,” Moultry said.

“It’s now a good place of recreation for our community and we work hard to keep it that way.”

The CCOB is a non-profit organization that is funded totally by donations from churches, businesses and individuals.

“We do things other than the annual ‘Walk for Jesus,’” Moultry said.

‘He always inspired us’

Memorials and tributes to UPS delivery man Tim Ward, who died accidentally over the weekend, appeared throughout Troy on Saturday.... read more