Scarbrough sworn in as circuit clerk 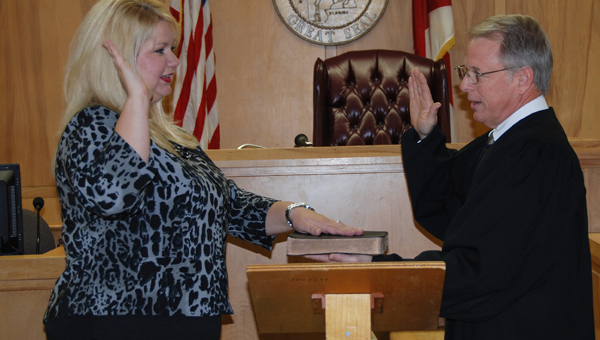 Judge William Hightower swears in Jamie Scarbrough as the new circuit clerk in PIke County during a Monday morning ceremony.

It was a family affair for Jamie Scarbrough on Monday as she was sworn in as Pike County’s new circuit clerk. About 60 people, including community members and Scarbrough’s family from Troy, Mobile and Florida, were in attendance.

And then there was Scarbrough’s work family. Scarbrough has worked in the courthouse for about 15 years, ever since she was 19 years old.

Judge William G. Hightower swore Scarbrough in at 9 a.m. Scarbrough took the oath on a weathered black leather Bible and thanked the judges in attendance, who postponed appointments in Enterprise to watch her ceremony. She then gave a short speech and blotted away tears.

“It’s going to be difficult, definitely, but I work with great people,” she said.

After a quick photo, Judge Hightower said he looked forward to Scarbrough’s time as circuit clerk.

“It’s quite an honor to administer the oath,” he said. “I’m confident she’ll do a fine job.”

Scarbrough’s predecessor, Brenda Peacock, served as court clerk for almost 22 years. She said she’s looking forward to the time she’ll spend with her grandchildren, and holds the highest confidence for Scarbrough.

After the ceremony, as Scarbrough hugged a hundred necks and took family photos, Peacock ribbed her about her new job.

“Alright girl, get in there and get to work,” Peacock said, laughing.

As she settled into her new office, Scarbrough noticed she had no nameplate and no holder for her business cards—just a few plants in one corner, a yellow smiley-face mug filled with pencils, and a dark brown cowboy hat hanging on the wall.

“It hit me this morning that I’m so used to sitting up front,” she said. “I want to cut a hole in this wall and see everybody.”

Scarbrough has worked as a court specialist at the courthouse since 1995. What began as a temp job quickly grew into something more permanent, especially after Peacock—true to her name—took Scarbrough under her wing.

Scarbrough said Peacock taught her and her colleagues to have respect for their work and the people they serve.

From her first few overwhelming weeks, Scarbrough helped in the office wherever she could and learned a whole new language, including a vocabulary of garnishments, arraignments, warrants, withholdings, summons and subpoenas. Now, she’s well versed in the art of the casework before the court date.

She may be in the same building, and her colleagues are still within arms’ reach, but for Scarbrough it’s a whole new career—one she has embraced, along with the coworkers she treats as friends and family.

“I respect them all so much,” she said. “I hope I’m able to serve them just like [Brenda] did. She’s a great inspiration.”