‘He always inspired us’ 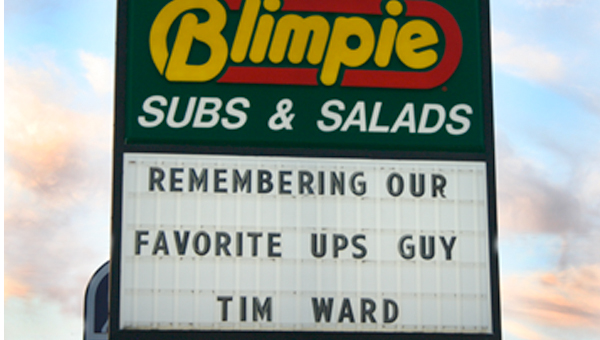 Memorials and tributes to UPS delivery man Tim Ward, who died accidentally over the weekend, appeared throughout Troy on Saturday.

Mark Johnson and Shelly Burnside spent the hardest day Monday that they’ve ever had in a Brown uniform.

“Everywhere we went today, there were tears,” Johnson said, in an effort to hold back his own.

Johnson and Burnside were running the UPS Troy route Monday for their longtime friend and co-worker, Tim Ward, who died Saturday at his home, the victim of an accidental shooting.

The UPS men said the early morning UPS meeting in Montgomery was a somber one as all thoughts were of the man they all knew and loved and would miss terribly.

“Tim kept us pumped up,” Burnside said. “He was always doing things to make us laugh. We meet in a big room with a slick, concrete floor. Tim would come running in, dive on the floor and side on his stomach about 30 to 40 feet and someone would signal, ‘Safe’ and everybody would laugh. Tim was just that kind of guy.”

Burnside has known Ward for 20-something years and Johnson for about 10. Johnson ran Ward’s route when he was on adventure.

“When I’m on vacation, I stay home and mow the grass,” Johnson said, with a smile. “Tim went on adventures. His latest was to Glacier National Park and Ireland. He was not one to sit idle.”

Ward’s UPS buddies remember him as a family man, a passionate Alabama and Troy University football fan and an athlete.

“He was very close to his dad and his brother and sisters,” Burnside said. “And, he was a great athlete. He could run up to an eight-foot fence, stop and jump straight over it, land and turn a somersault. He played baseball at Huntingdon College and five-man flag football with the Trotmans. He could have played any sport and been good at it.”

Most of all, Johnson and Burnside remembered Ward as the best Brown has to offer.

“Tim was always smiling,” Burnside said. “He never had a bad day and was an inspiration to all of us.”

The shock and sadness were not limited to the UPS family. Much of Pike County mourned the tragic death of “the UPS man.”

Ward had been making UPS deliveries in Troy for about 18 years and was a familiar face and a good friend to all who knew him.

Many businesses are displaying black and brown ribbons in memory of Ward. The UPS logo, “What can Brown do for you” is applicable to Ward for he was always willing to do what he could for others.

Deanne Baggett, owner of the UPS store in Troy, said Ward has been a good and trusted friend to many people in Pike County and will be greatly missed.

“Tim did so many things that nobody ever knew about,” she said. “He worked with handicapped individuals and drove a van for disabled individuals. He was a good and caring person. We all loved Tim and will miss him.”

Ward was a member of the extended Troy University family and Tom Davis, university relations, said Ward was one of the best-known and best-liked people around the university.

“Tim was always on the go but he took time to speak to everyone he knew and he knew practically everyone in every office on campus,” Davis said. “UPS never had a better ambassador than Tim. His best trait was a knack for making you feel like that talking to you or making a delivery to your office was the high point of his day.”

“There’s a memorial to Tim at the entrance he used at the Adams Administration Building,” she said.

“Tim was a friend to everyone and he was much more than a UPS delivery man. He was a true gentleman in every sense of the word. He always inspired us by all of his adventures and it was fascinating to hear about what all he had done. “It is a testimony to Tim’s character that he made such a positive impression on all the people he met. This is the hope — that people would feel the way about us that we feel about him.”

Funeral arrangements for Ward have not been announced. Those wishing to send expressions of sympathy to the Ward family may drop them off at the UPS Store on South Brundidge Street.

Scarbrough sworn in as circuit clerk